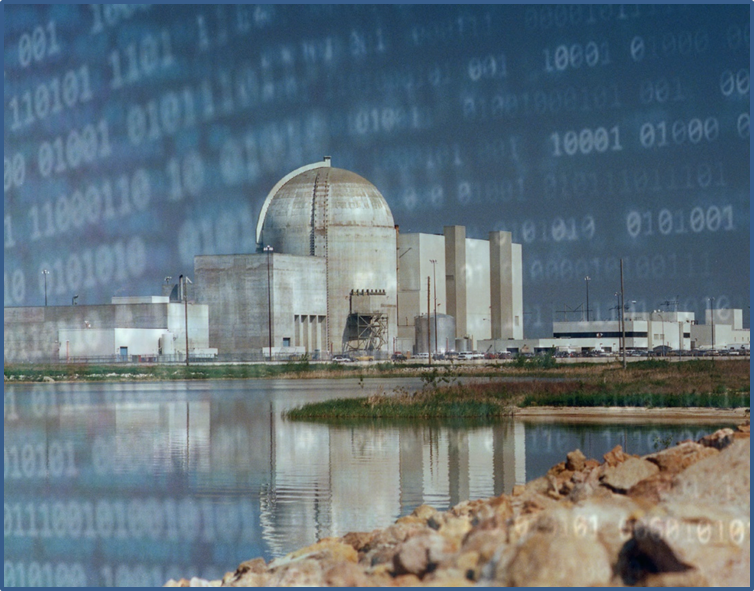 1)  Windmills hacked by Russians.  In a worrying escalation of software attacks, Russian engineers penetrated control systems at a number of US windmills, causing erratic operating performance and increased bird kills.

Yeah, if only things could be that simple.  In another example that the "internet of things" isn't going to be smooth sailing, at least a dozen US nuclear power plants have been hacked since May.  The hacks earned an amber warning (the second-most urgent) in a joint report issued by the FBI and the Department of Homeland Security, according to the New York Times.  And who is the most likely suspect?  Well, who's been hacking every system possible in the US in recent years?  The Russians, of course.

Should this be a surprise?  Not really.  Cyber was a central part of the US strategy to delay or derail the Iranian nuclear program via the Stuxnet virus.  Concerns over attacks on US reactors have been around for decades, often grouped under bland terminology such as the "design basis threat," which sets generic assumptions for the types of threats nuclear facilities could come under and the minimum requirements Nuclear Regulatory licensees must meet in order to address this risk.  Historically, attack scenarios assumed small planes and a handful of not particularly-skilled attackers.  Newer efforts, particularly post 9/11, did more realistic "force-on-force" scenarios, though excluded the potential attack from a larger airplane and still don't really assume a very big "force." But, if one can trigger shut-downs, or worse -- the failure of plant safety equipment -- via cyber attacks, who needs an airplane? The structure of plant systems make this difficult to do, but clearly the hacking attacks are looking for leverage.  Nuclear power assets have much more complicated security profiles than many of the substitute forms of energy.

2)  Leaked DOE draft study of how renewable energy will affect grid stability includes lame discussion of energy subsidies, reliant almost entirely on contractor for the Nuclear Energy Institute.  The big headline of this draft report is that it doesn't argue renewables are going to destroy conventional baseload energy.  Showing such a link was widely believed to have been a pre-determined conclusion of the effort, and good for DOE Secretary Rick Perry for (so far) resisting the pressure to game the analysis.  However, the lack of such a finding is purportedly the reason that the Trump administration is delaying its finalization and release.

Chapter 3 of the report goes through some of the causes that have led baseload plants to retire.  The discussion of subsidies (section 3.5, starting on page 43) is only two pages.  While DOE does incorporate strong work on energy tax expenditures by both Terry Dinan of CBO and Molly Sherlock of CRS, there are a slew of ways to subsidize any activity -- many of them less visible than tax breaks.

To fill in the broader detail, DOE relied on MISI, an industry consultant that has done work on subsidies for the nuclear industry since the days when their main trade association was the US Council for Energy Awareness and ran ad campaigns with picketing animals thanking the industry for clean nuclear energy (see below).  Nothing sells nuclear energy in the post-Chernobyl era better than a pro-nuke, sign-carrying, cartoon bunny. 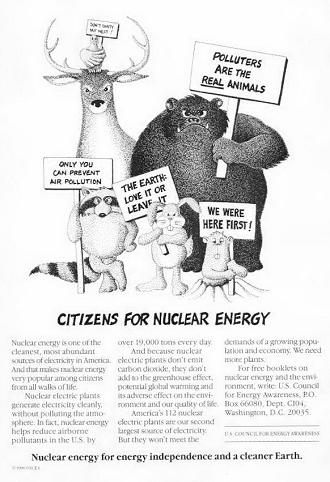 Not surprisingly, nuclear comes out looking pretty darn good when MISI is the one deciding which subsidies to include and how to value them.  We learn that "over the past two decades the largest energy subsidy beneficiaries have been coal and renewables and that tax incentives have been the means for the largest subsidies."  DOE notes, again based on MISI, that nuclear received the bulk of its support support through federal R&D, which they note is the easiest type of subsidy to see -- implying that the tally for nuclear is more complete than for other resources getting different types of support.  And even within R&D, MISI finds that renewables (a category that includes a wide mix of technologies) and coal have gotten more cash than nukes.  Much more, they say:  between 2011 and 2016, renewable energy received "more than three times as much help in federal incentives as oil, natural gas, coal and nuclear combined, and 27 times as much as nuclear energy."

Wow, that sure does sound pretty damning.  DOE staff clearly didn't want to do much digging here.  Despite what MISI reports, and what DOE quoted with seemingly little verification, the energy subsidies picture is quite a bit different than presented.  Indeed, nearly half of discovered but not-yet-producing oil and gas reserves in the US are dependent on subsidies (a bit of state, but mostly federal) to meet minimum investment hurdles.

3)  Congratulations to the Rocky Mountain Institute on its 35th anniversary

RMI is celebrating its 35th anniversary this year.  You can read the reflections of

co-founder Amory Lovins on reaching this milestone here.  Both Amory, and then RMI Research Director Rick Heede were instrumental supporters of my early work on energy subsidies in the late 1980s -- sharing their time, research, and insights generously.  While the policy innovation was what impressed me about RMI in the early days (and continues to be an integral part of their leverage today), I've grown increasingly impressed by their organizational capabilities as well:  to scale the institute, attract and retain key talent, and continually bring together people with different perspectives and skills to hammer out new paths to achieve critical energy goals for all of us.

4)  Ethanol:  It's still about corn, and always was.   It's been more than ten years since I took a deep dive into the arcane, yet ever expanding, world of ethanol subsidies.  At the time, nearly all of the environmental NGOs viewed ethanol as renewable and green.  Ron Steenblik (who oversaw that work while at GSI, and is now back at OECD) and I were concerned that the production systems for the key feedstocks in the US (primarily corn) were heavily subsidized, not sustainable, and that once the technology scaled the environmental problems would be enormous.  The ethanol subsidies simply added another layer to existing taxpayer support to corn production through crop subsidies, under-pricing of irrigation water, and corn-related environmental problems such as the dead zone in the Gulf from fertilizer run-off -- skewing agriculture in a bad direction.  These challenges continue to grow a decade later, as illustrated by the mounting concern over the depletion of the Ogallala aquifer:

Ogallala water made Kansas a leading producer of wheat. Ethanol production and the consolidation of beef feedlots in southwest Kansas and the Texas Panhandle made corn king.

Back in 2005 when our research started, many of the supporters of federal ethanol policy argued that while corn wasn't sustainable, cellulosic ethanol made from woody biomass was.  That conversion technology was more complicated, and they believed federal subsidies to corn were needed as a transitional policy to build an industry capable of solving the technical challenges of cellulosic production.

Our view was different.  First, it is a rare subsidy that is "transitional."  Once granted, a constituency quickly builds up to protect it, and these policies are very hard to undo.  Second, the amount of ethanol that could be easily absorbed into the gasoline of existing vehicles was limited to 10% of the mix.  Heavy subsidies to corn ethanol would fill that capacity (called the "blend wall") with the easy stuff.  After all, making fuel ethanol from starch had already been working for decades.  Thus, by ramping up corn ethanol production, the subsidies would increase, not decrease, the competitive barriers to more complicated, more expensive cellulosic ethanol substantially.

We also worried that because collecting and shipping cellulosic ethanol feedstocks were so expensive, the industry would primarily focus on producing cellulosic from non-starch portions of the corn plant instead.  The corn harvest already had processes and machines specialized for this purpose, and established transport networks to processing plants as well.  If corn remained the feedstock even for cellulosic, it would do nothing to address the environmental problems caused by massive corn cropping across the US, would add an incremental subsidy stream to more corn production, and would perpetuate an unsustainable liquid biofuel.

We had assumed the cellulosic production would come first from corn stalks and leaves (stover), creating concerns as well about declining soil fertility (see this article for an overview of the issue).  Thus far, we were right that corn remains a key source for cellulosic ethanol, but from corn kernel fiber rather than stover.  This does make sense:  the corn kernels are already in the plant, so conversion incurs no additional transport expenses, and likely reduces wastes somewhat.  The Pathway technology, developed by US firm Edeniq's, received a cellulosic ethanol registration from the US EPA at a fourth corn ethanol plant in June, with more in process.  Other plants using the Cellerate process also rely on corn kernals as a feedstock.

A material contribution to transport energy needs from cellulosic feedstocks that are actually sustainable remain a long way off.