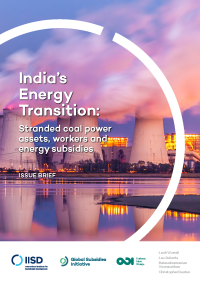 This issue brief takes a detailed look at why such a large share of coal power is struggling today and the
structural drivers—including subsidies—that may cause similar crises to rear their heads in future. In
light of this, it sets out some broad proposals from international literature on the topic of “just transition,”
which encourages governments to recognize stranded workers and communities as much as stranded
private or public assets. Key findings: