Mining's little messes and the trouble with self-bonding 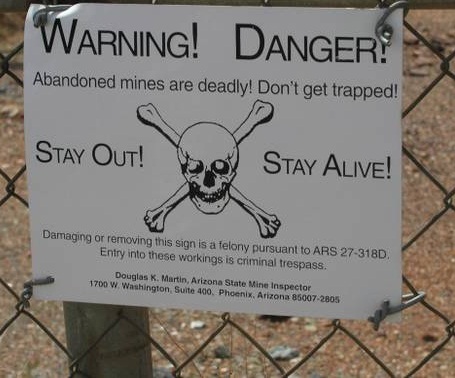 For many decades, natural resource industries would work their land, sell their minerals, and abandon their sites for somebody else to deal with.  There are tens of thousands of such sites around the US, associated with both energy and non-energy minerals; here's a sampling, compiled by the enormously important NGO, Earthworks.  But the costs of these sites can run into the billions, and neither public taxpayers, nor government entities "hosting" the mess, were particularly happy to inherit the problem.

The policy response has generally followed a two-pronged approach, at least in the US.  Financial assurance regulations were added into many environmental statutes to provide financial coverage for closure and post-closure care and reclamation to existing and new mine sites.  Trust funds, often funded via excise taxes on the mine type or mineral associated with the legacy sites being addressed, were implemented to reclaim old sites with no solvent owner. 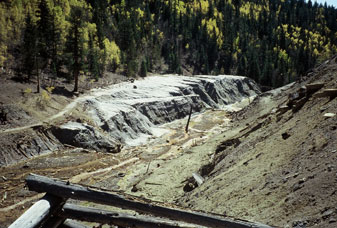 This response has been much better than doing nothing.  But many countries still lack either the regulatory framework or the enforcement capability to shift responsibility for post-closure care onto the firms benefiting from the minerals.  And even in countries with an appropriate regulatory framework (such as the US), the policy approach often breaks down in two main ways:

These are not new problems, nor are they a surprise.  Where the financial costs associated with properly closing, managing, and reclaiming single assets are consistently very high, regulatory policy has sometimes required more expensive, but much more secure, forms of financial assurance.

Decommissioning nuclear power plants, for example, must be funded on an annual basis, evaluated actuarially by independent third parties, and accrued in a legally segregated trust fund that cannot be touched even if the reactor owner goes into bankruptcy.  Trust funds may still be somewhat subsidized and underfunded (see discussion in Section 7.1 here), but the system works much more effectively that what exists in many other countries, the UK included; or in other resource areas with weaker assurance mechanisms.

So the recent upsurge in concern over the strength of "self-bonding" coverage by the major coal producers in the US did not come out of the blue.  Major coal producers, such as Peabody, have looked to "guarantee" their ability to fund their own site cleanups as cheaply as possible.  During the massive run-up in commodities a few years back, Peabody and other similar firms could have used their outsize profits to ensure adequate funding of their cleanup liabilities -- much as a non-energy corporation might use profits from a big new product to stabilize its underfunded worker pension funds.  But that would have taken real cash, and it was cheaper to self-bond their liabilities, kicking the can down the road.

But self-bonding has allowed the most financially fit coal companies to leave a share of their total liabilities uncovered.

All of those companies have seen their share price plummet in recent years as the industry has been battered by an abundance of natural gas, environmental regulations and a weak export market.

You can't buy life insurance once you are diagnosed with cancer

Now coal futures and coal prices don't look good at all.  And states such as Wyoming, as well as the federal government, are looking to force Peabody to buy third-party policies because they will be at least a bit more secure than corporate promises (which is what self-bonding really is) to pay for cleanup by a company considered highly speculative in the markets.

Regulators may be caught in a dilemma since enforcing self-bonding rules could just add another costly burden to a struggling industry.

"If the regulator demands more financial assurances in whatever form, it might just push a coal company past the brink," said William T. Gorton, a mining lawyer with Stites & Harbison in Lexington, Kentucky.

A problem, to be sure; but not a surprise one.

Interesting that both this article in Bloomberg, and this one in Reuters, describe self bonding as a lower cost way to insure for reclamation in the case of a bankruptcy.  This is incorrect:  self-bonding is limited to firms that are financially strong for the very reason that the bankruptcy risk is very low and there is a general belief by regulators that the firm's operations will be able to pay for cleanup and not dump liabilities onto taxpayers via bankruptcy.  Bankruptcy would render this self-bonding largely worthless.

Peabody coal failed the tests for eligibility to self-bond, but is relying instead on Peabody Investments Corporation, a subsidiary set up for this purpose.  The subsidiary is not publicly traded, and data on its financial condition are sorely lacking.  According to Reuters, financial data has not been released despite their efforts at the state level under freedom of information act requests.

Inadequate provision for asset decommissioning is not just an issue in the coal and nuclear industries.  There are thousands of abandoned oil and gas wells nationwide, and a combination of taxpayer and excise collections fund abandoned well identification and plugging programs.  Most US states have a specific agency tasked with managing the lifecycle of wells within the state.  Less visible are decommissioning needs and funding for hydroelectric and wind installations, where important gaps remain as well.

Regular payments to an external fund would largely avoid these problems

Common rules should apply to all of these types of assets -- with regular and actuarially-sound funding of closure and post-closure care over the productive operating life of the asset.  Funds should be paid into an external fund independent of the corporation, to ensure there is actually money available when needed even if the firm is gone.  Third-party insurance should be required to cover decommissioning risks outside of the "norm" -- such as higher than anticipated costs to remove an asset or clean a site; or premature closure before adequate accruals have been collected.  And this information should be succintly summarized in a one or two page standardized form that the asset owner files each year so that funding shortfalls are visible to both investors and the public.

Coal in Australia: A broader view of costs and benefits