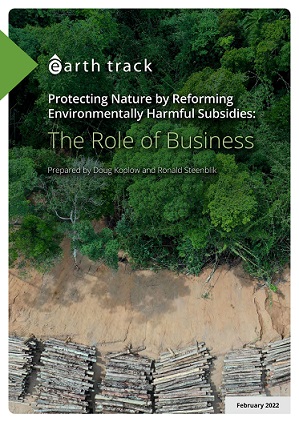 Today marks the release of a new Earth Track analysis, Protecting Nature by Reforming Environmentally Harmful Subsidies: The Role of Business, written by Ronald Steenblik and myself. Ron and I have worked together on subsidy transparency, valuation and reform for more than a quarter century at this point, and his expertise has always been hugely helpful in thinking these issues through. The paper is a good place to get an introduction to what environmentally harmful subsidies are, why they are a problem, their scale, what has been done to stop them over the past few decades, why new approaches are needed, and what those new approaches might look like.

The paper assesses environmentally harmful subsidies across the key sectors behind most of the world's greenhouse gas emissions: fossil fuels, agriculture, forestry, water, construction, transport, marine capture fisheries, and hardrock mining. It was commissioned by The B Team, which provided partial funding. Business for Nature has overseen much of the outreach. Both organizations have strong engagement with key business and civil society leaders, people who can adopt and scale some of the ideas we put forth to great effect. There is much that needs to happen at the upcoming Convention on Biological Diversity COP15 meeting; we are glad to contribute to that process.

In addition to the Earth Track report, background materials prepared by The B Team and Business for Nature that link the analysis to near-term needs under the CBD can be accessed at the links above.

We had two primary goals in doing this work.

The first was to restart the conversation on multi-sector subsidy analysis. It's a necessary approach if we are to protect irreplaceable global ecosystems, and too much of the discussion on subsidies has been happening in the context of a single resource area. Biodiversity loss tops my list of inexcusable unforced human errors, occurring at the cusp of humanity being able to read and learn from the genetic library that has built up over millions of years. The fact that we are destroying this library to get commodity products like palm oil, soy beans, sugar, and beef, and that those activities are propped up in no small way by government subsidies, makes the loss all the more distressing.

The second was to identify opportunities for business to be a positive force for change through much improved subsidy disclosure, and through business-oriented interventions. As detailed in section 4 of the report, progress in containing and eliminating EHS through international agreements has been slow; given the rapid pace of environmental change around us, the governmental process alone can not do the job in time. We believe that some of the areas of business engagement we highlight can change what is possible on subsidy reform and improve environmental performance even in countries with weak environmental regulations and little governmental oversight.

Some years back, as the vast scale of corruption-related wealth diversion from mining and timber operations was becoming clear, a movement to stem the theft by having companies publicly "Publish What You Pay" took off. That effort continues today. We hope that in the future the flip side of that idea will also be the norm. Ron refers to this as "Report What You Receive," where disclosure of public subsidies to business, by the businesses themselves, are a routine and required part of corporate reporting. If you are publicly traded, it could be part of your annual report; but even privately-held or state-owned firms, would be required to disclose. While the direction of financial flows may be different in these two initiatives, the goals are the same: use transparency and structured disclosure to achieve better environmental outcomes, protect public sector fiscal resources, and diminish the degree to which political power distorts decisions.

Environmentally harmful subsidies are at least $1.8 trillion per year

Our review aimed to get a rough estimate on the scale of these subsidies, which we did. They are at least $1.8 trillion per year across fossil fuels, agriculture, timber, water, marine capture fisheries, hardrock mining, construction, and transport. Based on available data, EHS flowing to fossil fuels and agriculture comprise the largest share of the total.

It's a big number, almost 2% of global GDP - clearly enough to be a huge problem. And with redirection or elimination, it's a big lever for solutions as well. Though we view this figure as a floor for the actual scope of EHS across these sectors, it is nonetheless more than three times the size of the subsidy reform target in the current draft of the Global Biodiversity Framework (GBF). Clearly the figure in the GBF needs to rise sharply.

We relied on assessments done by many other people to assemble our global estimate. These included NGOs, academics, and researchers at the OECD (where Ron worked for decades), the IEA, the World Bank, the FAO, and others. We are grateful for their work, and hope this study will shine a light on their efforts and why they are important; and that it will result in more resources flowing their direction so they can continue and expand their analyses. The way we have highlighted linkages across sectors, illustrated the variety of subsidies in each sector, and flagged many of the largest remaining data holes (see Table 4 in the main report) should make the multi-sector approach to assessing EHS seem more manageable. We will all benefit if these groups and others select one or two of those big remaining holes and work to fill them in.

The table below provides an overview of the findings by sector, with additional details in the full report. As we note in our preface, we have no illusions that we have captured anything close to the total picture. Indeed,  for the hardrock mining, construction, and transport sectors, though there were plenty of anecdotal examples of subsidies and associated problems, we found no global estimates of total support. Instead we've included some of those examples as placeholders for the much larger ground-up review that should be done. Similarly, in the water sector, there were comprehensive assessments of subsidies associated with municipal water and wastewater systems, at least outside of China and India. But globally, most freshwater is directly taken from surface and groundwater resources for use in agriculture and to a much lesser extent industry and municipalities. Too often the water taken directly from these sources is free or nearly so. This is a very important gap to fill in soon.

Particularly for unique global natural assets, and for the stability of key ecosystems overall, it is not enough to look at farm subsidies, or fossil fuels, or illegal timber cutting in isolation. It is the aggregate flow of government support that drives economic distortions and environmental damages; death by a thousand cuts. Subsidies to roads through ecologically sensitive areas can open forests to new activities; timber subsidies and those to irrigation water or other farm activities can accelerate the pace of resource extraction and land conversion. Biofuels mandates even in other countries can (and have) accelerated the loss of critical habitats. Poor governance, sometimes on purpose, can open the door to outright resource theft. And the complex ecosystems being destroyed can't be replaced.

Our paper provides global totals, which by definition average locations where subsidies are very high and others where they are not. Ideally, we'd take key habitats of concern and look in depth at all of the subsidies driving losses in that specific area so a clearer picture of the subsidy-induced activities can emerge. Again, we aim to restart a conversation, and hope that many will join it.

Looking at all of the sectors contributing to ecosystem stress is the only way to come close to seeing all of the key factors. But doing this comprehensively can be fiendishly challenging. The subsidies are tough to measure because they are often provided using multiple mechanisms of support with widely varying levels of transparency and ease of valuation. Direct budget disbursements are usually straightforward to measure; non-competitive natural resource auctions, credit subsidies, shifting of liability from private parties to the state, or support to state-owned natural resource industries much less so. The subsidies come from multiple levels of government and many different agencies or ministries at each level; and if the habitat being protected crosses national borders, complexity ratchets up again. Add in subsidies to multiple sectors that each contribute to a particular industrial activity (e.g., water, agriculture, and energy flowing into the production of biofuels), and often the recipient will be the only party to know the full "take" from all of the various subsidy mechanisms from which they benefit.

Unfortunately, what is most visible is the activity on the ground: with each year, more forests are cut, more aquifers depleted, more complex ecosystems converted to single crops and more greenhouse gases pumped into the atmosphere. Subsidy reform won't stop all of this, but it can slow it down. It can adjust the price information that producers and consumers use when they make purchase decisions, where they direct new R&D or locate new production facilities, what flood protections to design into their buildings, and what new capital they buy. New businesses and partnerships between businesses, NGOs, and governments can make it much harder to steal timber or fish, or to pollute like crazy without anybody knowing about it; and much harder to operate extractive and polluting activities with little or no financial bonding to clean your mess if your company disappears. And over time, these changes can accelerate innovations, managerial as well as technical, that really will make a difference.

The Business Case for ehs Reform

Businesses are large players in all of these sectors, and many of them benefit from the very government supports we advocate removing. Why, then, would they do it? On the most basic level, the destruction of nature threatens business interests, with over half of the world’s total GDP - $44 trillion – moderately or highly dependent on nature according to Business for Nature.

But there are more narrow competitive drivers as well. New innovation so often starts with a niche idea, pursued by a small group of people who see benefits others don't, or face pressures other don't. In the beginning, they are too small for anybody to care about; but if they are successful, sometimes the systems, software, and products they build change the way everybody else works and interacts with the world.

With EHS, even within the same industry, different firms often face disparate pressures and incentives regarding the reduction of greenhouse gases, other forms of pollution, and ESG factors in general. This variation creates opportunities for some firms to move first, move fast, and move decisively to change the rules on EHS and the norms on their disclosure. Some examples of where the first movers might come from are below: 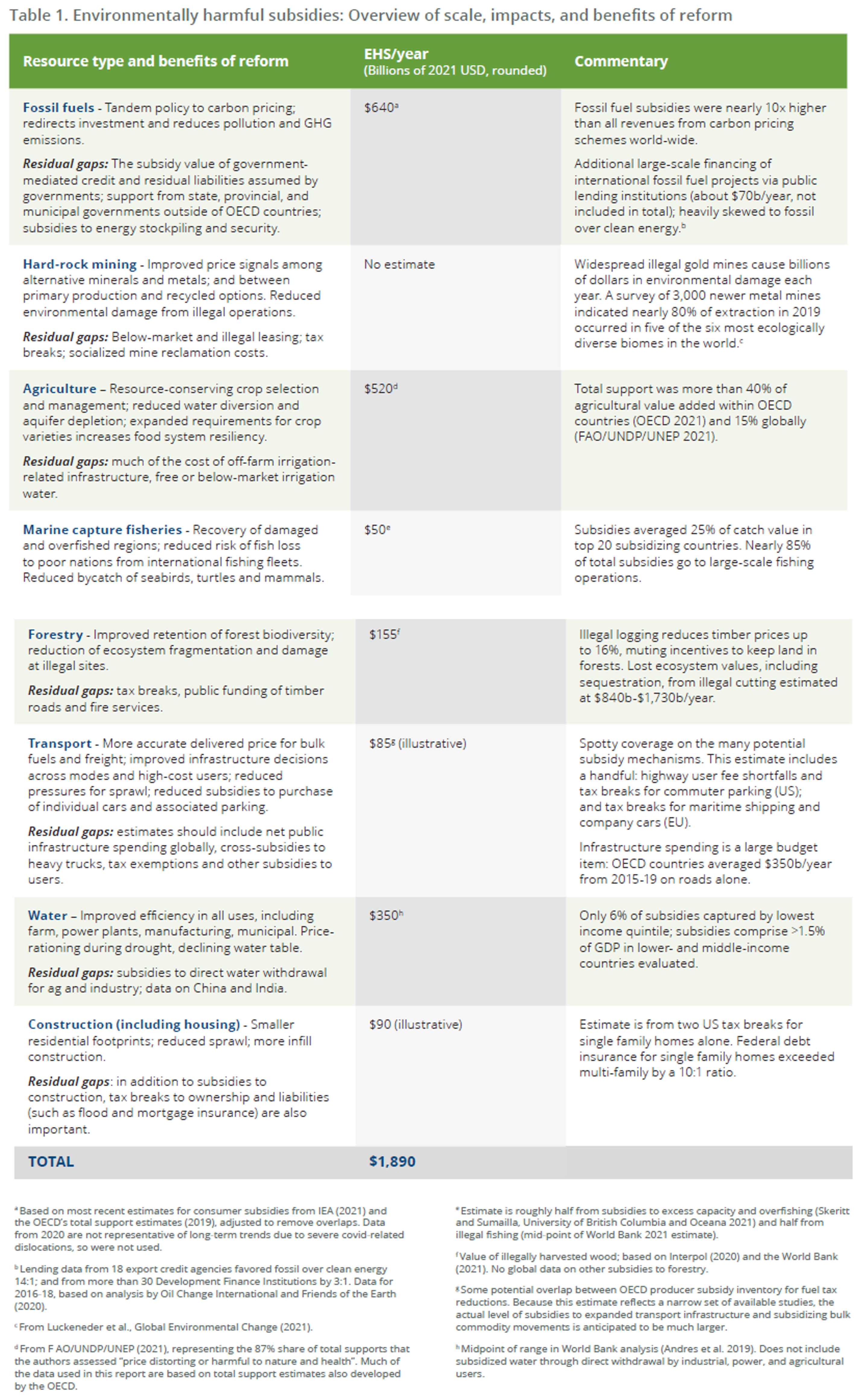