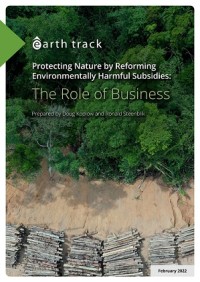 Industry-specific reviews of government subsidies have been much more common than analyses examining several natural resource sectors at once. Yet there is a great deal of overlap across sectors. Indeed, it is the combination of support provided by multiple levels of government and government programs, across numerous natural resource areas, that can accelerate resource depletion, pollution, or habitat loss in particular regions.

Environmentally harmful subsidies (EHS) are government actions that by design or effect accelerate the production or consumption of natural resources or undermine broader ecosystems supporting planetary health. While data availability on the scale of these subsidies varies widely across sectors and countries, even based on incomplete estimates they measure at least USD 1.9 trillion a year or about 2 percent of global GDP.

Eliminating these subsidies would free-up substantial government resources to support social needs; send more accurate signals to investors and producers on where to direct R&D efforts and deploy new capital, and to consumers on what to buy; and accelerate innovation to reduce greenhouse gases in all parts of the economy. Removal of EHS would also reduce negative externalities through changes in demand patterns and the mix of suppliers, incentivizing them pursue cleaner options. This working paper explains the basic mechanisms of government subsidization, and provides an overview of important categories of EHS, their scale where known, existing efforts to value and discipline them, and areas where actions by business have the potential to overcome existing roadblocks to reform.

Government-led efforts to discipline EHS, particularly in the areas of agriculture, fisheries, and fossil fuels, have been in process for decades. Progress remains slow. This working paper details these efforts, discusses how subsidy reform could be beneficial to many businesses, and identifies specific areas where rapid action by business could make a big difference in protecting critical biodiversity and addressing climate change.