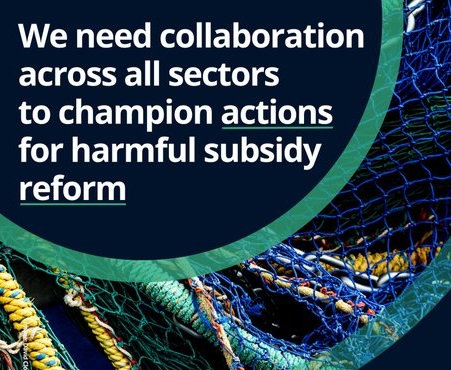 Translating the complexities of our government subsidies report into an accessible and inspiring summary and call to action is no easy task. This video, commissioned by Business for Nature and The B Team, does a great job.

Industry-specific reviews of government subsidies have been much more common than analyses examining several natural resource sectors at once. Yet there is a great deal of overlap across sectors. Indeed, it is the combination of support provided by multiple levels of government and government programs, across numerous natural resource areas, that can accelerate resource depletion, pollution, or habitat loss in particular regions.

This study is a contribution to the European Commission’s ongoing efforts to investigate and reform environmentally harmful subsidies (EHS). The report focused on three methodologies proposed by the OECD for the identification of EHS, the analysis of their impacts and the implications of their removal - namely the ‘quick scan’, the ‘checklist’ and the ‘integrated assessment’ methods. The methodologies were tested in the context of six case studies, in the field of energy, transport and water.

Since its inception fifteen years ago, the Green Scissors Campaign has fought to make environmental and fiscal responsibility a priority in Washington. By eliminating subsidies and programs that both harm the environment and waste taxpayer dollars, the federal government can protect our natural resources while reducing the growth of government spending and making a significant dent in the national debt. Green Scissors 2010 identifies more than $200 billion in wasteful government subsidies that are damaging to the environment and harmful to consumers.

One way to correct market failures is tax shifting -- raising taxes on activities that harm the environment so that their prices begin to reflect their true cost and offsetting this with a reduction in income taxes. A complementary way to achieve this goal is subsidy shifting. Each year the world's taxpayers provide at least $700 billion in subsidies for environmentally destructive activities, such as fossil fuel burning, overpumping aquifers, clearcutting forests, and overfishing.

This blog is about environmentally harmful subsidies: what they are, where they come from, how you measure them, how you make others disclose them, and just maybe how you can get rid of them.

I should say I'll be writing mostly about environmentally harmful subsidies, because some other stuff will come in sometimes.  You'll see some material on recycling, on the use of market-based instruments for environmental protection, on carbon control approaches, even about old advertising for products that later turned out not to be as great as first thought -- things like lead paint and asbestos. There will also be the occasional rant about random things that make no sense -- like Ticketmaster "convenience fees" perhaps.  But mostly I'll be writing about government programs around the world that harm the environment we live in.

My posts will tend to be less frequent and a bit longer. While I welcome your feedback and comments, I simply don't have enough time to be able to respond to all of them or to cull the inevitable inappropriate or spam-like ones. As a result, public comments are not turned on, though you can send a private e-mail. If your feedback to me helps to move forward a topic area, I will post your feedback online. However, I will not attribute this material to you by name unless I have advance permission to do so. I hope to be able to have guest commentary from time to time. In every area that I touch upon, there are others who specialize on those topics.  I hope some of you will be willing to share your insights on  the origins of particular subsidies or problems with reporting transparency. If there is an area you would like to post about, please let me know. I will likely contact some of you about this as well.

Government subsidies is a wonkish area to be sure. When I first stumbled upon it in the late 1980s, I had no idea I'd still be following it 20 years later. But there is something fascinating about piecing together the complex, and sometimes ingenious ways, in which industries have been able to use their political systems to transfer value to themselves. Like the mythical hydra, when one venue of subsidization is closed down, another two are often opened. The more complex and arcane the method of subsidization, the better for the recipients and their political partners, as the potential fallout from public exposure is lower.

Environmentally harmful subsidies will likely be around for quite some time to come. However, there is much room for improvement. The revolutions in information technology that have already washed through logistics and marketing have yet to make much headway in the realm of improved accountability in governance. Globalization creates natural constituent groups to oppose subsidies in other countries (albeit while trying to protect them in their own). The World Trade Organization's Agreement on Subsidies and Countervailing Measures has the potential to bring about change as well, though that potential has yet to be well tapped.

If you are having trouble understanding particular types of subsidies, you are not alone. They were often constructed that way. But I hope you will persist in trying, and let me know if I've done a murky job explaining something so perhaps a second take can clear it up. Surely there are other environmental issues that makes for better media: somebody camped out in a redwood tree, or an industrial facility spewing toxic gases into the nearby community.  But in terms of the way we use our fixed endowment of natural resources, subsidies are among the most important.

Modifications in the tax code that allow ethanol blenders to treat their tax credits as tax-exempt rather than includible in taxes hardly capture the imagination in the same way. Too bad. This particular example generates an incremental subsidy to the corn ethanol industry of nearly a billion dollars per year.  This wrinkle alone provides more total subsidies than many renewable energies get in total.  Pending iniatives in the US to create a government-funded "bank" for energy investment is another.  Assumptions on loss rates for loan guarantees, made largely out of the public eye by a handful of people, will drive how big a subsidy trough is opened and ultimately tens or hundreds of billions of dollars in taxpayer losses.  If you multiply these examples by ten thousand around the world, you can begin to get a sense of the immense scope of this problem.

Environmentally harmful subsidies may encourage more rapid or more extensive depletion of natural resources; they may hide the real costs in terms of pollution, accident risk, or energy security from the resource users; they may encourage development patterns that generate much larger environmental destruction than needed. This list goes on, limited, it seems, only by how hard one wants to look. The energy, water, solid waste, forestry, agricultural, mining, transport, fisheries, and primary materials sectors tend to be the ones most commonly associated with environmental harm. My own expertise is mostly energy and water, so this will often be the source of my examples.  A central goal of the new site is to expand the resources available in all of these areas; if you specialize in these other natural resource areas, please post subsidy analysis that you have done.