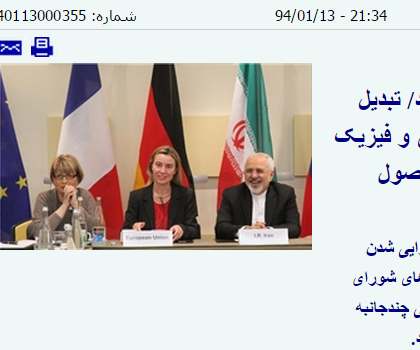 1) Official fact sheet on agreement suggests many business-as-usual policies will remain.  Harvard Kennedy School of Government's Belfer Center translated a Farsi fact sheet on the agreement that was released by the Iranian Foreign  Ministry.  There appears to be a fair bit of wiggle room here.  Some excerpts:

According to the framework of existing solutions, none of the nuclear facilities or related activities will be stopped, shut down, or suspended, and Iran's nuclear activities in all of its facilities including Natanz, Fordow, Isfahan, and Arak will continue...According to the reached solutions, Iran will continue its research and development on advanced machines and will continue the initiation and completion phases of the research and development process of IR-4, IR-5, IR-6, and IR-8 centrifuges during the 10 year period of the Comprehensive Plan for Joint Action.

These centrifuges are faster than the existing ones in use, and therefore would shorten Iran's breakout time to a bomb.

On sanctions, the fact sheet reads:

According to the reached solutions, after the implementation of the Comprehensive Plan of Joint Action, all of the UN Security Council resolutions will be revoked, and all of the multilateral economic and financial sanctions of the EU and the unilateral ones of the US including financial, banking, insurance, investment, and all related services, including oil, gas, petrochemicals, and automobile industries will be immediately revoked. In addition, nuclear-related sanctions against real and legal individuals, entities, and public and private institutions, including the Central Bank, other financial and banking institutions, SWIFT, shipping and aviation industries of the Islamic Republic of Iran, oil tanker companies, will be immediately removed. Also, the P5+1 member countries are committed to restraining from imposing new nuclear-related sanctions.

With such a level of distrust already on Iranian implementation, a phased removal would seem to make more sense and provide continued leverage for cooperation and compliance.  The immediate removal of all sanctions leaves little room to address future cheating -- and based on current statements, cheating seems a near certainty.

2)  Top Iranian officials quoted as saying faster centrifuges will go into production the day the agreement is signed.  FARS is the semi-official news agency of Iran.  Full article is here.

Iran has said that its IR-8 centrifuges enrich uranium 20 times faster than the IR-1 centrifuges it currently uses.

According to the FARS report, "Iran's foreign minister and nuclear chief both told a closed-door session of the parliament on Tuesday that the country would inject UF6 gas into the latest generation of its centrifuge machines as soon as a final nuclear deal goes into effect by Tehran and the six world powers."

It said that Foreign Minister Mohammad Javad Zarif and Atomic Energy Organization of Iran (AEOI) head Ali Akbar Salehi made the promise when they briefed legislators on the framework agreement, and claimed the move was permitted under the terms of the deal.

The use of faster centrifuges is not allowable according to the US interpretation of the framework.

3) Places to hide nuclear work remain, as military sites declared exempt from inspections.  Of course, when a country knows certain locations are free of oversight, any illicit work naturally migrates there.  Here's the lowdown from the Iranian Minster of Defense:

Iranian Defense Minister Major General Hossein Dehqan said there has been "no agreement on inspecting Iran's military facilities and no visits will be allowed."   He made the remarks on Wednesday in answer to reports that during Iran's nuclear negotiations in Lausanne, Tehran agreed to have its military centers inspected.  Dehqan underlined that access to the country's military centers is among the Islamic Republic's red lines.