The debate on US energy policy continues to rage.  The reminder from Japan that nuclear reactors can, and sometimes do, have accidents is merely the worst of a number of examples in recent years about the risks and potentialities of various energy pathways.  Coal mine and oil rig accidents do kill people and harm the environment; large scale biomass production for energy takes land and water from other uses (including baseline carbon sequestration), and can compete with food consumers as well; there is more natural gas than we thought, but there might be some negative surprises when we fracture bedrock to get it.  In short:  there is no free lunch, complicated systems break down, and what seems the best way forward can change quickly.

Against this backdrop, politically-directed subsidies to most forms of energy continue to escalate.  To map the distortions, the U.S. Energy Information Administration is presently at work on an update to its earlier review of subsidies to the US energy sector.  Their updated analysis is supposedly due out later this spring.  Given that the EIA is the most respected government source of energy data, their subsidy data will again we widely read and cited.

Unfortunately, few specifics on the new analysis have been made public at this point.  I've been told that Senator Lamar Alexander (R-TN) has again put in the request for the study and set the research terms.  However, attempts to confirm this, and to get a copy of his actual request, have been met by a wall of silence from Conrad Schatte, Alexander's energy point person.

I have been critical of past EIA reports (see here and here).  Some of the Administration's simplifying assumptions and definitional rules have led them to exclude very large subsidy programs and to understate the magnitude and uncertainty of some of those they have included.  As illustrated in the table below, this is not a small problem.  Appropriate adjustments to their research scope and methods would have increased EIA's aggregate subsidy estimates by billions of dollars per year and greatly altered the relative subsidy shares to different fuels.  Both absolute subsidies and relative shares of total support to oil, coal, nuclear would rise substantially.  Absolute subsidies to wind would likely have been substantially higher as well, though aggregate support would have remained much lower than for conventional fuels.

One of the problems here is that at least some of these large omissions seem to have been driven by the allowable scope of research.  These terms were set by Senator Alexander in his letter to EIA.

Because Alexander holds strong preferences for some forms of energy and animosity for others (hates wind, loves nukes, for example - see discussion after the table), there is some risk that the scoping of the research mandate can be shaped to support his desired outcomes rather than to neutrally assess the impact of subsidies.  Because of this potential risk, the research mandate for EIA's current subsidy work be made public now, rather than just published along with the final study.  Should there be gaps in their allowed work program that would again skew their results, at least there would be time to fill them without undue delays in the report's timeline.

Too often the federal government seeks to pick energy sector winners via targeted subsidies to favored fuels and industries.  This approach is not one likely to achieve robust or efficient solutions, but appears to be a central element in the way Senator Alexander approaches energy markets.

The Senator is not shy about his preferences.  Wind energy is "going to war in sailboats" according to a 2010 compilation of five addresses Alexander has given in recent years outlining his energy vision.  True, the cover graphic is amusing, what with the brave soldier using his dulled sword to fight the bombers and all (Lamar couldn't even give the guy a musket?)  But as a road map for our energy future, it leaves much to be desired. 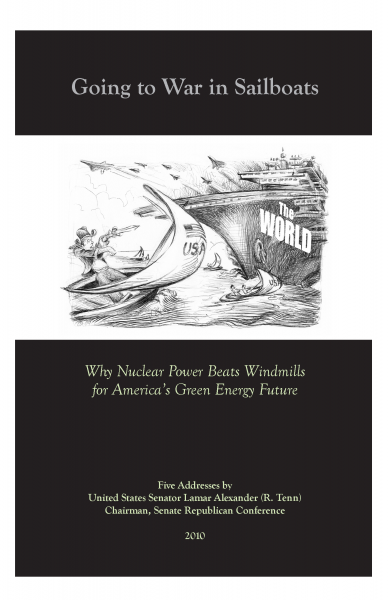 The preface, written in early 2010, cites the numbers from EIA on the relative subsidies to nuclear versus wind based on the research criteria that Alexander himself crafted. The document notes:

At current rates of subsidy, taxpayers would shell out $170 billion to subsidize the 186,000 wind turbines necessary to equal the power of 100 reactors. While federal government loan guarantees should jump-start the first few reactors, the subsidy cost to taxpayers of building 100 reactors would be one-tenth as much.

A striking phrase contrast, to be sure -- if it weren't flat out wrong.  EIA's study ignored all subsidies to new reactors if they weren't yet costing the treasury money (none were).  Yet the 100 plants the Senator is pushing to build would clearly tap into that support in a big way.  Alexander may believe that only the "first few" reactors would need loan guarantees, but there has not been any evidence to support such a conclusion, though much evidence to refute it.  Lobbying expenditures spiked when loan guarantee programs were being formulated; and nuclear projects have been regularly cancelled when reactors were culled from the loan guarantee finalist list or term sheets came out that actually required appropriate premiums for default risks.

Alexander's research mandate to EIA also excluded an array of other important supports such as favorable accelerated depreciation schedules and caps on nuclear liability.

Specific clauses of concern in the 2007 research mandate include:

There's no mention of using competitive energy markets, the price system, or pursuing the lowest carbon abatement strategies first.  Rather, we should proceed based on the Senator's view of the optimal path.  But political beliefs do not a vibrant market make, and others -- hardly anti-nuke partisans -- do not share his optimism for nuclear as the primary greenhouse gas abatement strategy.  Exelon CEO John Rowe, for example, despite operating the largest fleet of merchant reactors in the country, found in 2010 (see PDF page 8) that new nuclear power plants were the fifth most expensive option.  By last month -- though before the Japanese earthquake and tsunami -- new reactors had fallen further still in attractiveness, becomming their third most expensive option (see PDF page 11).

The limitation to "identifiable federal budget impact" excludes the large intermediation value of federal loan guarantees on high risk energy investments (valuable even if they don't default because they allow high risk enterprises to tap large amounts of low cost debt); increasingly large consumer subsidies triggered by the Renewable Fuel Standards; outlay equivalent values of tax breaks where the tax breaks themselves are not taxed; the provision of very expensive, high risk energy services (such as nuclear waste management) by taxpayers on a break-even basis at best, and with no built-in return on investment; and assuming energy-related trust funds that are running operating surpluses but actuarial deficits are not conveying subsidies.