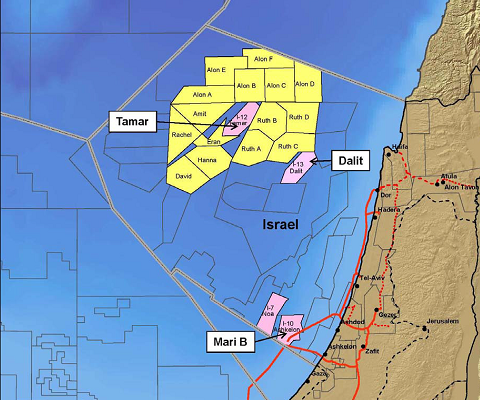 For more than half a century, hydrocarbon deposits have enriched many middle-eastern countries beyond measure.  But geology didn't favor all spots equally, and Israel pretty much came up dry.  The closest they came to oil gushers was the dark mud of the Dead Sea.  So development shifted elsewhere:  to tourism, high tech, and sustained investments into alternative energy.

This all changed with the discovery of large reserves of natural gas off the coast of Israel in 2009.  The Tamar field began production in March 2013.  Drilling in the even larger Leviathan field is expected to begin in 2015.  It will never be on the scale of Saudi Arabia or Kuwait, but the finds are a game changer nonetheless -- and not only in postive ways.  More secure domestic energy supplies and higher government revenues will be beneficial.  But rising currency valuations risk threatening existing core industries (the "Dutch Disease"); supply chains can become even more brittle; and historical efforts to diversify energy supply (many of which were also low-carbon) can be derailed.

The State is not ambling blindly in addressing these risks.  Government officials have established a number of commissions to review how best to move forward on gas development.  And they have commited to forming a Sovereign Wealth Fund to capture a portion of the windfall gains from the developments in order to invest them for the benefit of current and future generations.  Earth Track has reviewed this information, identified a number of remaining risks, and made a series of recommendations (below) to address them.  A more detailed discussion can be found here.

1)  Market pricing of all gas.  Use market-based pricing of natural gas sold in domestic or international markets in order to avoid politically-distorted decisions on export versus domestic consumption levels and to optimize revenues to the government.  This pricing neutrality should extend to associated royalties, excess profit fees, and recovery of field-related security charges.

2)  No subsidized conversion. Allow natural gas prices to determine the pace and location of infrastructure conversion to gas.  Don't subsidize either conversion-related capital or natural gas flows to particular industrial or commercial enterprises.

4)  Full royalty capture. Review allowable exclusions and deductions from royalties to identify and correct areas of potential gaming and likely friction as fuel and revenue flows grow in future years.

6)  Payout rules that allow fund appreciation over time.  Review and likely reduce payout rates from Fund to allow some investment earnings to compound within the Fund to grow principal over time.

7)  Annual distributions direct to long-term capital projects.  Look to more closely align spending of income distributed from the Fund to Treasury with long-term investments into human and physical capital.

8)  Tighter rules on borrowing from Fund principal.  Tighten rules on what counts as an emergency under Fund rules to ensure that resultant borrowing of Fund principal (and potential subsequent debt forgiveness) occurs only in the most extreme of circumstances.

9)  Review appointment procedures of key Fund oversight functions.  This would ensure that the direct and indirect influence of political figures over the structure and management of the Fund is appropriately checked in order to protect its independence.

Large natural gas finds off the coast of Israel create significant financial and energy challenges for a State long focused on high technology exports and alternative energy development.  To address these concerns, Israel has already implemented study commissions and proposed a Sovereign Wealth Fund (the "Citizens of Israel Fund").  This paper reviews the proposed structure of the Fund and a number of other core issues related to the gas finds such as how much to export, how to deploy revenues, and how the development will affect energy security.  It makes the following recommendat