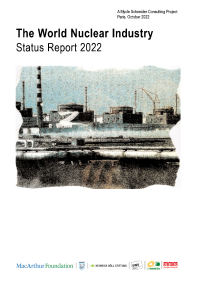 As with earlier reports, The World Nuclear Industry Status Report 2022 (WNISR2022) provides a comprehensive overview of global nuclear power plant data, including information on age, operation, production, and construction of reactors. But due to the unprecedented situation in Ukraine, WNISR2022 includes a dedicated chapter that assesses the specific challenges and risks of Nuclear Power and War.

WNISR2022 analyses the status of new-build programs in some of the 33 nuclear countries (as of mid-2022) as well as in potential newcomer countries. WNISR2022 includes sections on ten Focus Countries representing 30 percent of the nuclear countries, two thirds of the global reactor fleet, and four of the world’s five largest nuclear power producers.

The Decommissioning Status Report provides an overview of the current state of nuclear reactors that have been permanently closed. The chapter on Nuclear Power vs. Renewable Energy Deployment offers comparative data on investment, capacity, and generation from nuclear, wind and solar energy, as well as other renewables around the world. Finally, Annex 1 presents overviews of nuclear power programs in the countries not covered in the Focus Countries sections.

Of particular interest to Earth Track users, WNISR includes challenges with, and cost overruns on, new reactor delivery in both the France and Finland; as well as a look at subsidies to new and existing reactors in the United States.