The "End Polluter Welfare Act (EPWA)," introduced by Sen. Bernie Sanders (I-Vt.) and Rep. Keith Ellison (D-Minn.) last week aims to strip away as many federal subsidies to fossil fuels as possible.  The bill reaches well beyond the short-list of most obvious subsidies that past reform efforts have targeted.  This elevated reach can be seen in the length of the subsidy list (four pages); in the estimated fiscal benefits of reform ($110 billion over ten years, roughly 2.5x the take of the narrower proposals, such as in President Obama's budget, or bills introduced by Sen. Robert Menendez (D-NJ)); and in the variety of groups supporting it (including the grass-roots powerhouse 350.org, run by Bill McKibben).  You can read the full text of the proposed legislation here. 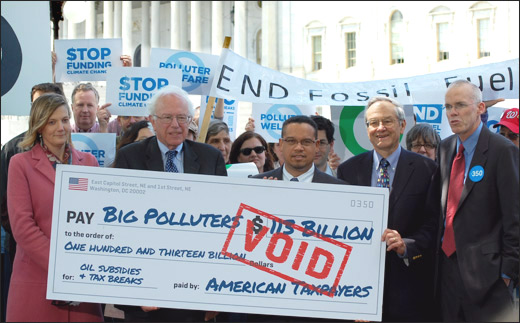 Will Sanders and Ellison succeed where far more modest reform attempts quickly ran aground?  Perhaps not.  But that is hardly the only point of introducing something like this.  There is much to be gained simply by making a subsidy list that is far more comprehensive than the lists that have come before.

The bill takes the first step in undoing a big limitation of the prior, narrowly-cast legislative reform efforts.  Those initiatives focused only on a handful of the ways the feds have bolstered the fossil fuel industry for nearly 90 years.  As a result, they created the impression that the whole oil and gas subsidy trough wasn't really that large:  four billion or so per year and a handful of tax breaks -- end of story.  Such an impression was not accurate, of course.  But it has been quite useful to the lobby groups fighting to protect their fossil fuel pork.  With the number of targeted policies smaller, the lower fiscal savings from reform also led to more muted public outrage.  As a result, the lobbying job for industry to deter subsidy elimination was vastly simplified.

Enter EPWA.  By listing a much wider range of policies subsidizing oil, natural gas, and coal, the EPWA forces a more honest debate on the distortionary effects of federal policies on energy markets.  Though earlier reform efforts have primarily focused on stripping away tax breaks, the subsides to conventional fuels come in many guises.  There are below-market royalty rates, subsidies to fuel-related pollution controls, direct spending, caps on liability, and assorted subsidized credit for domestic power plants and exports of oil and gas-related goods and services.  There are subsidies to transporting bulk fuel, and to corporate structures particularly useful for natural resource extraction firms.  And there is subsidized oil security -- an area that despite it's large size was too political even for Sanders and Ellison to take on.  But other OECD countries with oil stockpiles to stave off supply disruptions (required of all member countries of the International Energy Agency) routinely recover the cost of these activities from oil markets rather than taxpayers.  The US should do the same.

Here are some of the subsidies I was particularly happy to see included in the EPW Act: