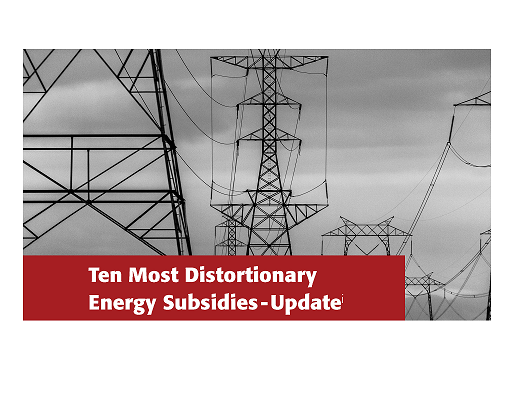 One of the challenges (albeit a fun one) of any "top ten" list is trying to distill the most important items down from a much bigger list of contenders.  It's not just the fiscal cost that matters.  The degree of environmental damage, the dumping of risks onto taxpayers rather than investors, or the degree to which particular policies mute investments into better long-term energy solutions all come into play.

This is my second trip through the energy subsidy top ten -- both times at the request of Boston University Professor Cutler Cleveland.  Cutler and his co-editor Christopher Morris developed an entire volume of energy-related top ten lists in their recent book, Handbook of Energy Volume II: Chronologies, Top Ten Lists, and Word Clouds, published by Elsevier this past December.

My contribution, Ten Most Distortionary Energy Subsidies - Update, highlights the subsidies I think top the list in terms of significance and market distortions.  You can also read the as-published version (shorter and without citations) and the original list from 2007.  Thanks are due to Elsevier for permission to repost. 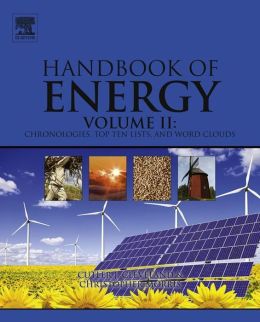 The Handbook of Energy was a big project, and big projects often have a lag between when an article is submitted and when it is ultimately published.  It's been roughly two years since I completed this list for Elsevier, so I thought it useful to review the policies to see if there have been any major changes.  Where there have been, the shifts have unfortunately almost always been in the wrong direction -- with larger amounts of support than two years ago.

1)  Absence of charges on greenhouse gas emissions.  Progress on constraining carbon emissions remains worryingly slow, and the situation seems to have worsened in the past couple of years.  The EU's Emissions Trading System, previously the most important in the world, largely collapsed in 2013 - though attempts to restore functioning continue.  Weaker controls on emissions result in economic gains for carbon-intensive activities and a slower transition to lower-carbon alternatives.

2)  Oil security.  The defense of oil choke points has long been a key mission for the US military.  Though the site-specific risks ebb and flow with geopolitical events, the basic situation regarding defense of oil shipping lanes is largely unchanged.  Fracked oil may have a long-term potential to broaden fuel supply diversity, but this remains some years off.  Further, the recent instability in Ukraine illustrates that supply security is quite important in natural gas markets as well.

3)  Liability caps on nuclear fuel cycle facilities.  Efforts to finalize an international agreement on minimum levels of liability coverage for nuclear accidents continue unrealized.  Even if proposed levels are adopted, the coverage would remain far below appropriate levels. The Fukushima accident helped put to rest the idea that somehow these liability caps aren't subsidies, a frequent industry talking point.  Taxpayer liability for the Fukushima accident in Japan was estimated at about $250 billion two years ago, more than 3 c/kWh of net nuclear power generated since the inception of Japan's civilian nuclear power program.  Current estimates are twice that level, at a staggering $500 billion, with resulting liability subsidies per nuclear kWh rising sharply as well.

4)  Purchase mandates, tax credits and exemptions for ethanol and biodiesel.  Some of the earlier tax breaks and gasoline tax reductions have gradually faded as pre-set expiration dates hit and the policies were are not renewed.  This resulted in a small reduction in subsidy levels according to the International Energy Agency, from about $22 billion in 2011 to $19 billion in 2013.  Mandates remain in effect in key US and EU markets, however, contributing to loss of habitat and biodiversity around the world.  There does seem to be some progress in ensuring EU policies are not accelerating environmental destruction, though more time is needed to see how effective these will be.

5) Cross-subsidies in electricity markets.  Perhaps the most significant development with respect to power cross-subsidies has been a number of US utility districts that have begun levying surcharges on providers of distributed renewable generation for "grid services."  Utilities argue that straight net metering enables some distributed power owners to avoid contributing to the fixed costs of the grid.   In contrast, distributed power generators argue that these charges are being established arbitrarily as a market impediment by utilities that also own a good deal of the generation the distributed resources will outcompete.  Resolution seems a long way off on this issue, and many of the other cross-subsidies remain entirely unaddressed.

7)  Goverment absorption of disposal risks for high-level nuclear waste.  No changes here.  An operating permanent repository still doesn't exist anywhere in the world, the US Yucca Mountain repository remains closed, and risks and responsibilities for this stage of production continue to be shifted to taxpayers.

8)  Tax exemptions for petroleum used in international air and water transport. Efforts to at least include aviation emissions from international flights under the EU emissions trading system failed in 2012.  Past estimates of these subsidies pegged the value as high as $45 billion; more recent work by the World Bank has even larger figures -- up to $100 billion annually.  There is much that could be gained from reforms in this segment of the transport sector.

9)  Free use of cooling water in the thermal power sector.  Droughts continue in many parts of the world, and the issue of water demands from the energy sector have received increasing attention.  However, elevated attention does not seem to have translated into pricing:  I'm not aware of any progress on the issue of making thermal power plants pay for their water usage.

10)  Feed-in tariffs and purchase mandates for renewable energy.  Subsidy levels to renewable power continued to rise sharply, from the $44 billion in 2010 noted in the Top Ten update to an estimated $82 billion in 2012.  Problematic energy sources such as landfill gas, waste-to-energy plants, and some types of biomass electricity do not appear to face exclusion from eligilibility criteria, as I recommend.  However, as subsidy costs have risen, many countries have begun to cut back on their allowed payments to wind and photovoltaic resources.  Further, key subsidies (such as the production tax credit in the US) are time limited, and older generation will start aging out of the tax breaks in larger numbers.  These two factors can be expected to mute the continued growth of subsidy costs going forward.

Disagree strongly with any policy I've included?  Think I've missed a doozy?  Please let me know by e-mail to comments@earthtrack.net.

Complex security, environmental, and economic trade-offs remain the norm for the energy sector.   Government intervention is also the norm, and too often involves a torrent of energy plans, white-papers, and legislation.  In an ideal world, government policies should work in tandem with market forces to achieve an adequate energy supply mix that is cleaner and more diverse than what preceded it.  These synergies do not currently exist.  Instead, there are thousands of government energy market interventions in place around the world - many of which act counter to stated energy securi

Complex security, environmental, and economic trade-offs remain the norm for the energy sector.   Government intervention is also the norm, and too often involves a torrent of energy plans, white-papers, and legislation.  In an ideal world, government policies should work in tandem with market forces to achieve an adequate energy supply mix that is cleaner and more diverse than what preceded it.  These synergies do not currently exist.  Instead, there are thousands of government energy market interventions in place around the world - many of which act counter to stated energy security, dive