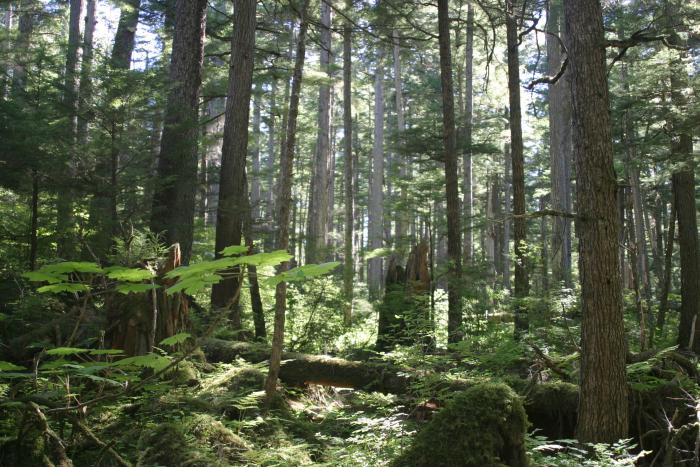 There are fewer and fewer non-fragmented ecosystems in the US; the Tongass National Forest in southeast Alaska is one of them.  The Los Angeles Times notes that at 17 million acres, the Tongass is the "world's largest intact coastal temperate rain forest."  For nearly two decades, the federal government has banned the construction of new roads in nearly half of this area.  Roads are what bring trucks, logging, mining, and other activities deep into the wildnerness, so the roadless rules were, and still are, a key element in protecting the ecosystem.

The State of Alaska wants more roads and more development, though some of the economic assessments noted below suggest that they may be misguided in this goal.

Aside from the large environmental benefits of the Tongass National Forest as an intact rainforest, the economics of timber harvesting in the region are poor, and have been for decades.  Detailed work on these issues was done in the 1980s and 1990s by, among others, Randal O'Toole (now with the Thoreau Institute) and Ross Gorte then with the Congressional Research Service.  O'Toole noted in the late 1990s that "the Tongass is well known as the forest that sells trees for the price of a Big Mac."

Sweetheart deals with mills to use the timber

As detailed by O'Toole in 1997, Tongass trees were locked into 50-year long contracts with pulp mills.  The deal with Ketchikan Pulp Company (KPC) was signed in 1955 and gave them exclusive access to timber from half of the Tongass National Forest with no competitive bidding.   A contract with the Alaska Pulp Corporation (APC) worked similarly.

Although the timber purchases were supposed to be at market prices, O'Toole documents that the actual amounts paid were much lower, and well below the Forest Service costs to make the timber available:  "During most of this period, the average cost to taxpayers of putting timber up for sale was about $10 to $15 per thousand board feet. So the $1.66 per thousand that the KPC sale was returning to the Treasury only covered about 10 to 15 percent of costs."

Calculations of an acceptable "market price" under these contracts allowed producers to deduct many associated costs of their operations.  This approach is frequently a recipe for firms to game the system in order to reduce their payments to resource owners, and has been a problem with oil and gas leases as well.

The minimum price for Tongass timber could never go below 50 cents per 1,000 board feet, earmarked for forest restoration.  This changed during contract revisions in 1975, after which the timber companies were able to claim that in any year when the road costs would have resulted in zero payments, the mandated floor payment for reforestation should be taken from earlier "excess" resource payments the firms had made to Treasury in earlier years. The net result was that even though the historical sales that had generated these "surpluses" were actually costing taxpayers money and well below the market value of the timber, the feds would nonetheless pay these funds back to APC and KPC as credit for the mandated floor payments on the newer cutting.  The charade widened taxpayer losses.

While at CRS, Gorte documented the history of loss-making timber sales in a 2004 report.  Issues with losses began to be raised in detail in the 1970s.  A more formal analysis of five year budgets (FY1974-78) of all national forests by NRDC found that "depending on the costs included, about half of the national forests had costs exceeding revenues for all or part of that period."

More recent assessments by the US Government Accountability Office estimated that even without road construction costs, timber sales in the Tongass lost an average of $11.4 million per year between 2005 and 2014.  Taxpayers for Common Sense, a Washington, DC-based NGO, calculated that Including road costs the losses nearly doubled, to an average of $20 million each for the 2008-17 period.

Alaska is more diversified; timbering can put other sectors at risk

Headwaters Economics prepared a detailed review of the broader economics of the Tongass in 2014.  Gorte, as well as Ben Alexander, were the authors.  The paper examined whether an earlier commitment to transition regional development away from old growth timber had begun or not. Their key findings, indicating little change, are below:

Indeed, Headwaters calculated that between 1998 and 2012, regional timber jobs fell 80% (-982 jobs) while all other private sector jobs were up about 7% (1,384 jobs).  Regional timber jobs comprised only 0.9% of total private and self-employment jobs -- tourism and fishing provided much more.  Both of these other sectors can be harmed by damage to the Tongass.  Alaska's own Department of Fish and Game requested that clear-cuts be minimized to protect important deer habitat; and for cuts to steer clear of wolf dens.  Both requests were ignored.

So what is driving the continued push for more sales?  Distorted economics are likely partly at play.  If the federal government foots the losses on the sales (or pays to build the roads, which is effectively the same thing), returns to the state actors -- government or private -- look artificially high.  And humans tend to focus on cash flows to themselves, ignoring losses that they may be causing others far away.

In part, the continued push for Tongass cutting seems to be an effort to prop up remaining sawmills in southeastern Alaska.  Alaska Forest Association Executive Director Owen Graham noted that cutting of young growth timber can provide jobs to the lumber jacks, but only the big, old growth trees will keep the saw mills open.  Smaller diameter trees would be shipped abroad with no local milling (though even with the old growth timber, roughly 30 percent is exported as whole logs for processing abroad).

The main mill being protected by opening up Tongass old growth appears to be Viking Lumber, which at least is family-owned rather than part of a large multinational or owned by a hedge fund.  Nonetheless, it employs only 40 people (a more recent article says 34) and has argued it is unable to make a profit were it to mill smaller diameter (new-growth) logs. Mill owners say that if you include all of the related jobs supported by the mill, 145 people depend on them for employment.

The apparent subsidies to these jobs are staggering.  Assuming average losses on recent Tongass sales ($20 million, including timber roads per Taxpayers for Common Sense figures) are reflective of going-forward losses, this amounts to a federal subsidy of $500,000 per job-year for the mill workers, even before the headcount started to drop.  Even using a job count of 145, subsidies per job-year are nearly $140,000.

And that is before ascribing any cost to the risks to tourism and fishery jobs from renewed cutting; or from fragmenting a globally-unique ecosystem that is already under stress due to climate change.  Once those costs are taken into account, Alaska would seem better served to apply the subsidies now flowing to keep the mill going by feeding it subsidized old growth timber into identifying promising new industries that will provide good jobs for the long-term.

Like implant dentists or utility accountants, subsidy wonks can go to trade meetings (yes, meetings on natural resource subsidies do exist) to find people who talk our language.  In that "safe" space, we can be met with a knowing nod as we wax poetic on the difference between revenue loss and outlay equivalents, or what is missing from a price gap estimate.

Go into the normal world though, and not only does this talk make no sense, but it drives people out of the room fast -- really fast.  Sure, they care about the effects of massive subsidies to natural resource extraction: dwindling forests and aquifers, mountain top removal to tap into coal deposits, pollution, and degraded land.  But if you can't make the link between the policy and the impact, it is hard to leverage the political support needed to change the policies.

This is an issue that most of us subsidy wonks have grappled with over the years, unfortunately, I think, with limited success.  One person who has done this extremely well is Annie Leonard, who debuted with a very well received animated web documentary "The Story of Stuff" that explored the links between what we buy and the environmental damage caused by its production.

Today brings her newest release: the "The Story of Broke" which looks at how governments seem to find the money to give subsidies to powerful and often polluting industries, but then claim empty wallets when it is time to fund social programs.  In full disclosure, I provided a fair bit of input to them on subsidy types and impacts.  That said, I provide information on subsidies to a wide variety of people and organizations, from home-schooled high school debaters (their topic a few years back was on ethanol and ethanol subsidies) to reporters, educators and government staff.  I never know what will come from it.

In this particular case, I am quite impressed with how "The Story of Broke," well, tells its story.  Annie and her team have captured some of the core issues I've struggled to convey, and they've done so in catchy and readily accessible ways:

Here's hoping her ability to capture and convey this information so widely will help alleviate the bottlenecks to sensible policy reform.

Adapted from the report's introduction:

The Tasmanian forestry industries has received more than A$630 million in direct and indirect subsidies from 1997 to 2008. The study also found that despite the huge taxpayer funded subsides, which were intended to create jobs, that there have been steady job losses over the same period.  The authors advocate a commercially-based industry, and that Forestry Tasmania deliver a commercial rate of return.