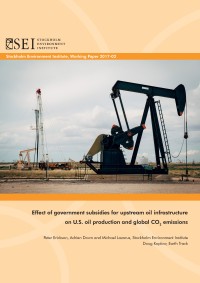 The United States now produces as much crude oil as ever – over 3.4 billion barrels in 2015, just shy of the 3.5 billion record set in 1970. Indeed, the U.S. has become the world’s No. 1 oil and gas producer. The oil production boom has been aided by tax provisions and other subsidies that support private investment in infrastructure for oil exploration and development. Federal tax preferences, for example, enable oil and gas producers to deduct capital expenditures faster, or at greater levels, than standard tax accounting rules typically allow, boosting investment returns.

This paper quantifies the effect at the field level of a dozen U.S. federal and state subsidies to oil production and estimates the corresponding effects on US and global CO2 emissions.

At recent oil prices of $50 per barrel, subsidies push nearly half of yet-to-be-developed oil into profitability, potentially increasing U.S. oil production by almost 20 billion barrels over the next few decades. Once burned, this oil would emit 8 billion tonnes of CO2, about 1% of the world’s remaining carbon budget to keep warming under 2°C, as envisioned in the Paris Agreement. This would represent a much greater share – perhaps a quarter – of a carbon budget for U.S. oil production alone.

These findings suggest an even stronger case for subsidy reform than has been articulated to date. Not only would removing federal and state support provide a large fiscal benefit to apply to other national spending priorities; it would also demonstrate U.S. compliance with existing G20 commitments and generate substantial climate benefits as well.  Access: