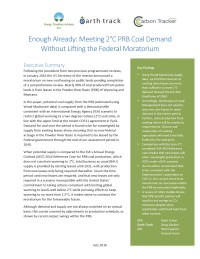 In January 2016 the US Secretary of the Interior announced a moratorium on new coal leasing on public lands pending completion of a comprehensive review. Nearly 90% of coal produced from public lands is from leases in the Powder River Basin (PRB) of Wyoming and Montana.

In this paper, produced by Carbon Tracker, Energy Transition Advisors and Earth Track, potential coal supply from the PRB is compared with a demand profile consistent with an International Energy Agency (IEA) scenario to restrict global warming to a two degrees Celsius (2°C) outcome, in line with the upper limit at the recent COP21 agreement in Paris. Demand for coal over the period is found to be far outweighed by supply from existing leases alone, meaning that no new federal acreage in the Powder River Basin is required to be leased by the Federal government through the end of our assessment period in 2040.

When potential supply is compared to the Energy Information Administration’s (EIA) Annual Energy Outlook (AEO) 2016 Reference Case for PRB coal production, which does not constrain warming to 2°C, total business as usual (BAU) supply is provided by existing leases until 2031, with production from new leases only being required thereafter. Given the time period until new leases are required, and that new leases are only required in a scenario incompatible with the United States’ commitment to taking actions consistent with limiting global warming to levels well below 2°C while pursuing efforts to keep warming to no more than 1.5°C, it makes sense to continue the moratorium for the foreseeable future.

Although demand and supply are not always matched on an annual basis, this can be covered by adjustments to production schedule, as shown by recent output swings within the PRB.