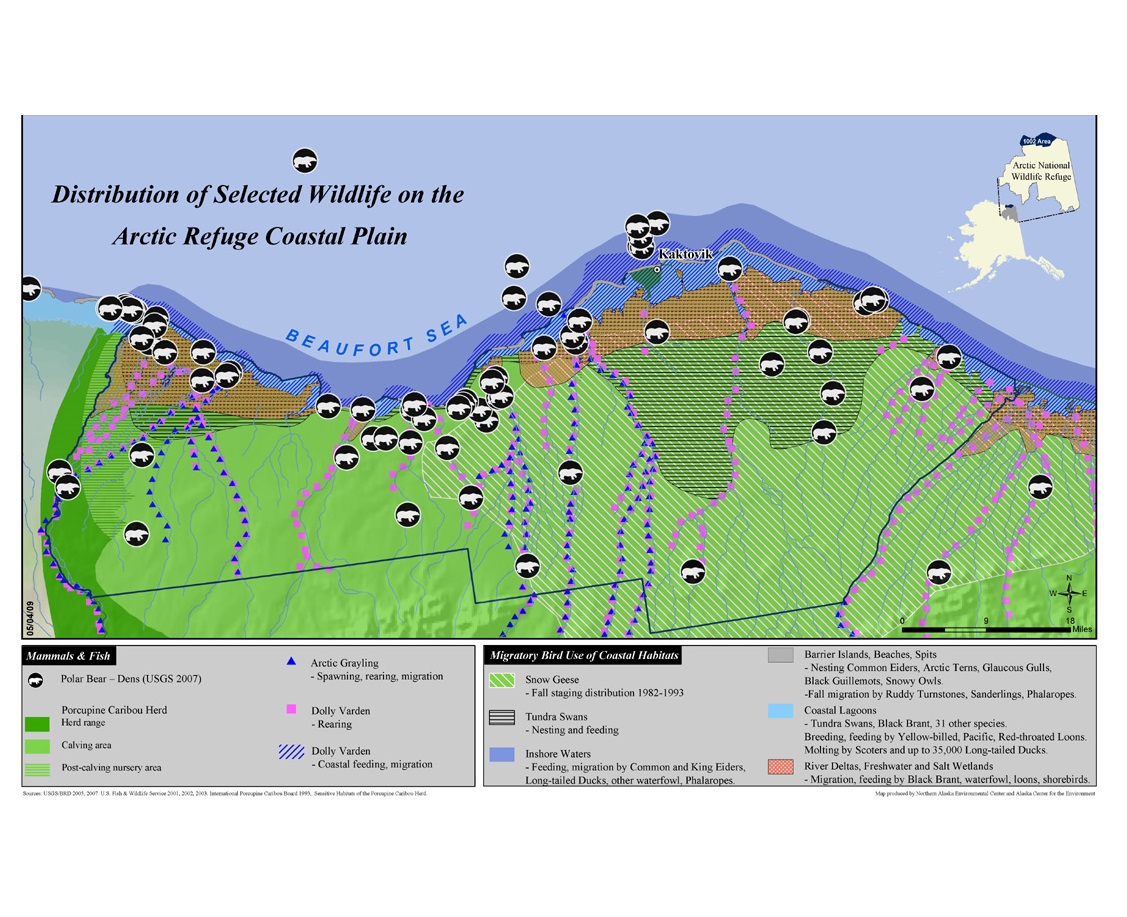 When the drinks are flowing at the open bar, it's not a big surprise that patrons swarm for their free pints.  Tax bills are the same, with amendments aplenty as the hours ticked on towards the Senate passage of a massive tax reform package last week.  Hey, when you are spending somebody else's money and nobody has time to read what you are sticking in anyway, why not take a gander on a nice payout for your district friends?

Here's a rundown of a few energy-related items of interest in the tax bill.  The Senate version, with hand markups and all, and run through OCR so you can search it, can be accessed here.

1)  Wildlife reserves are for drilling

Tax bills aren't just for taxes, and wildlife reserves aren't just for wildlife.  After decades of trying, the Senate moved to open the coastal areas of the Alaska National Wildlife Refuge (ANWR) for oil and gas exploration and leasing (see Title II, page 474) of the bill.

Some background on the remaining hurdles and not so great economics of oil and gas in ANWR are found in this useful piece by Oil Change's Andy Rowell.  Analysis I did with the Stockholm Environmental Institute looking at field-level data across the US also indicated these areas well below breakeven at current market prices.

No such ambiguity about the move can be seen from Alaska Senator Lisa Murkowski though.  She fought hard for this change and believes it'll bring great wealth even if scientists and economists don't.  But other short-term factors are also driving this decision.  First, Alaska's budget remains heavily dependent on oil and gas revenues -- something that aging fields and falling prices have hurt.  Second, the Trans-Alaska Pipeline System (TAPS) needs more product to keep the unit costs low and the infrastructure maintained.  Indeed, it turns out that getting flow from ANWR was a core assumption when it was designed.1   And boosting the flows will reduce unit costs, reduce operating costs (low flows in a massive diameter line cost more to keep moving), and boost confidence in continued service to existing fields that would be stranded were the line to close.  One final benefit of keeping TAPS running:  pipeline operator Alyeska can continue to defer its responsibility (and associated cost) to dismantle the pipeline and clean up the right-of-way.

Oil revenues are easier to measure than fish and wildlife values, and there is quite a bit of wildlife in the areas being opened for drilling.  Audubon magazine notes the region being opened has the highest biological diversity for any protected area above the Arctic Circle.

Look for low realized values on the lease sales due to a low price environment, remote and expensive fields, and a high risk of delays from court challenges.  Expect state or federal subsidies to infrastructure, perhaps combined with weak financial assurance requirements for the drillers to spur deals along.  And finally, expect some spills and other damage to natural resources.  All will erode the net gains to the state from this move.

But in the arcane rule of budgets, all that counts is the gross gain to Treasury from the sale of a natural resource, resulting in net offsetting receipts of $1.1 billion according to CBO.  Not much in the context of an increased deficit of $1.5 trillion, and even this low value treats as zero the damages to natural resources or other property values.  But that, unfortunately, is how this rather bizarre world operates.

The very last section (Section 20003) of the Senate bill authorizes the sale of $600 million of oil from the Strategic Petroleum Reserve in 2026 and 2027.  This is a very small amount of money at the very end of the scoring period for this bill. Yet, it does help a bit to offset some of new tax subsidies in the bill.

How's it relate to hedge fund managers?  Because the Senate instituted a 3 year holding period (up from one) on private equity and hedge fund carried interests, boosting revenue by only $1.2 billion over 10 years.  Had they instead eliminated carried interest subsidies altogether, tax revenues would have been increased by $16 to $180 billion over the same period.

Not making the hard decisions leaves the Republican Senators using a combination of gimmicks, like selling oil from SPR starting in 9 years -- and simply running up the debt -- instead.

Pass-through entities escape corporate level taxation, but historically were taxed at the individual level based on the economic situation of the individual partner.  Many of these partners are wealthy and taxed at the highest marginal rates.  They don't like this.

The House bill caps the individual rate on income from pass-throughs at 25%.  The Senate bill instead allows up to 23% of expenses to be deducted from taxable income, with a similar effect on the effective tax rate.  Earlier versions of the Senate bill capped deductions at 17.5%; boosting it to 23% increased the revenue loss by $114 billion (to a total of $476 billion) over the 2018-27 period.2

A last-minute amendment sought to expand this benefit to both MLPs and to financial PTPs such as Blackstone.  Only the first got through -- though it's a big one.  It further extends the tax subsidies on offer to oil and gas MLPs by reducing the taxes even the partners have to pay.

I remain unclear as to whether even the financial MLPs are fully frozen out of this new subsidy.  To the extent their energy investments are organized as limited partnerships within the larger PTP, income would flow out of the investments both to the parent company (and those invested in the traded shares) and directly to the limited partners who have bought into the individual investments or investment funds.  For this latter group, my assumption would be that the lower tax rate would apply.  Please email if you know the definitive answer on this.

4)  LIFO no more for Grandaddy; but still available for ExxonMobil

Any tax rules that enable taxpayers to deduct a higher proportion of their expenses more quickly generates a financial benefit on a time-value-of-money basis.  Inventory turns out to be important in this way.  Firms usually have many identical products in their inventory -- whether barrels of oil or computers.  When they sell a product, they deduct the cost of that product (via cost of goods sold) from revenues in order to calculate the taxable income.  The costs of that product are not identical over time:  commodities may change sharply in value over the inventory turnover cycle; and during periods of inflation costs across all sectors can change quickly.  The freedom to deduct the highest COGs sooner can greatly reduce near-term taxable income.

Historically, firms could choose whether to deduct the costs of each sale based on the COGS for the oldest item (or barrel of oil) still in inventory (FIFO, or "first-in, first-out"); or select more recent costs if those were higher (LIFO, or "last-in, last-out").  This same logic applied to people's stock portfolios.  It Grandad bought 400 shares of Apple Computer for $10 share (split-adjusted) back in 2006, and another 400 shares at $115 each back in 2015, and he needed to raise cash to pay for home repairs, he could decide which "inventory" to sell from.  Selling the 2006 shares would generate a much larger capital gains tax cost than selling the 2015 shares; the tax cost would drive which shares he picked.

Too bad for Grandaddy:  the bill the Senate passed (section 13533) removes this choice and requires that whatever shares were purchased first get applied to any sale (first-in-first-out).  Taxes for him, and millions of other individual investors will rise.  Investors in mutual funds could be particularly hurt.

No such constraints are being put on the oil industry -- even though the International Financial Reporting Standards (IFRS) have not allowed LIFO for many years.  Though pressure has been building for the US firms to comply with international standards, for now LIFO is still allowed in corporate accounting.  US accounting rules do require firms to track the difference between the first-in-first-out method required internationally and the tax-favored LIFO approach via a line item called the "LIFO Reserve."  This data allows one to see which firms and industries are benefiting most from LIFO accounting:  the bigger the reserve, the more the firm is saving.  Privately-held firms can also benefit from this, but there is no public data to see the resultant amounts.

More recent data on the energy sector shows that the beneficiaries of LIFO are highly concentrated, still dominated by Exxon Mobil (see Table 1).