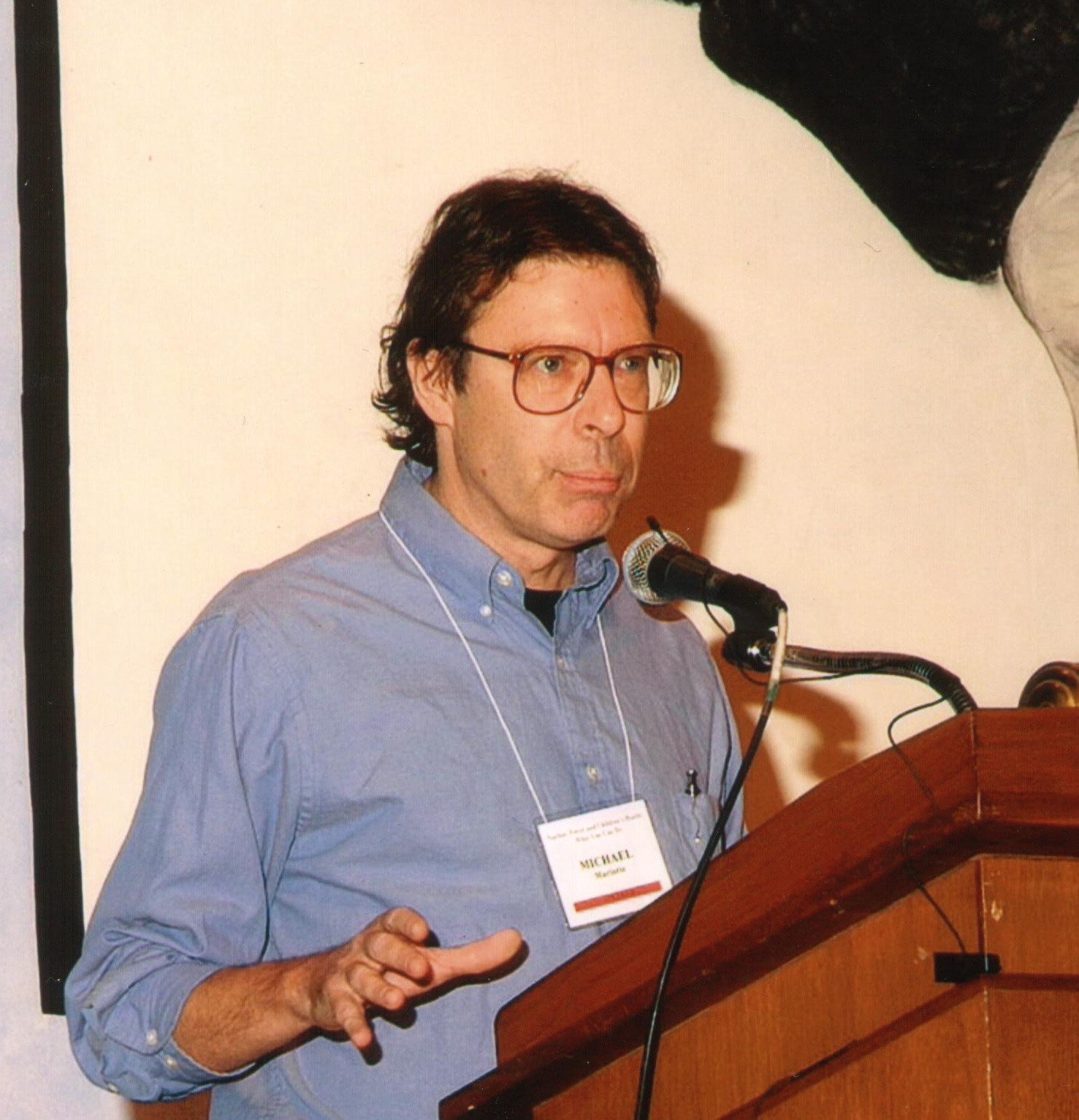 In years past, when my project work would divert me from posting about energy subsidies on the Earth Track blog, I'd get an incoming email from Michael Mariotte at NIRS.  This wasn't an intrusive inquiry.  Rather, he'd merely be checking in to be sure everything was okay, saying he'd noticed I hadn't posted in awhile and that he hoped I'd post again soon.

Which of course I would.  Because if Michael could work on all of the projects he was working on; write salient and well-argued posts on his GreenWorld blog; track details big and small about the issues, people, and projects in the nuclear areas he'd been on top of for decades; indeed, if he could take time out to email me despite battling cancer -- surely I could find time to crank out a post or two.

So I guess it is somewhat fitting that, after another one of these blogging gaps, I end the hiatus by properly noting Michael's passing this past May from pancreatic cancer.

You can read about the many things he accomplished during his life in far more auspicious venues than this one.  There were detailed obituaries in the Washington Post, the New York Times, the Washington City Paper where Michael had been their first editor, and of course, by his colleagues at NIRS.

For me, Michael was like an information utility on all things nuclear.  His immense dedication to rational nuclear policy was always evident, as was his encyclopedic knowledge of every aspect of the field.  No matter the new paper or study that had come out, Michael already knew about it.  For nuclear policy issues percolating in the news or the NGO world, he knew the history, its evolution over time, the people who shaped that evolution and how, and the forces behind the current batles.  If I had questions, it would take but a brief email and he'd be back to me in short order.  He was always giving of his time, articulate in his responses, and, it sure does seem, nearly always right.

The gap he has left is not one that will be filled any time soon, but the role he played was a critical one, and I am grateful to have known him.

Energy resources vary widely in terms of their capital intensity, reliance on centralized networks, environmental impacts, and energy security profiles. Although the policies of greatest import to a particular energy option may differ, their aggregate impact is significant. Subsidies to conventional fuels can slow research into emerging technologies, thereby delaying their commercialization. Subsidies and exemptions to polluting fuels reduce the incentive to develop and deploy cleaner alternatives.

Last week, the New York Times ran an article ("Future of Solar and Wind Power May Hinge on Federal Aid" by Kate Galbraith) discussing the reliance of solar and wind energy on federal subsidies. Bernard L. Weinstein, associate director of the Maguire Energy Institute at Cox School of Business, Southern Methodist University, wrote a letter critiquing these subsidies, advocating instead a policy to push for more oil and gas exploration, arguing they would require "no new subsidies."  The Institute was funded by Cary Maguire of the Maguire Oil Company and prepares students for jobs in the field.

The Times requested responses to the letter for their Sunday Dialogue yesterday.  Mine was not selected, but covers some points not raised in the letters that were.  It is reprinted below.

What Would Jefferson Do? The Historical Role of Federal Subsidies in Shaping America’s Energy Future

Using data culled from the academic literature, government documents, and NGO sources, in this paper we examine the extent of federal support (as well as support from the various states in pre-Civil War America) for emerging energy technologies in their early days. We then analyze discrete periods in history when the federal government enacted specific subsidies.

The Nuclear Regulatory Commission has ruled that Calvert Cliffs 3 ineligible for licensing because is violates the Atomic Energy Act's rules on foreign ownership, control or domination.

The NRC staff has determined that UniStar’s application does not meet the requirements of 10 CFR 50.38. The basis of the determination is: (1) UniStar is 100 percent owned by a foreign corporation (EDF), which is 85 percent owned by the French government; (2) EDF has the power to exercise foreign ownership, control, or domination over UniStar; and (3) the Negation Action Plan submitted by UniStar does not negate the foreign ownership, control or domination issues discussed above.

This ruling was the result of dogged work by the NGOs copied on the ruling: Michael Mariotte of NIRS, Paul Gunter of Beyond Nuclear, Alison Fisher of Public Citizen, and June Sevilla of Southern MD Cares.  You can read their 2008 petition here, and a document history of the Calvert Cliffs 3 reactor here.

A quite interesting summary of the challenges associated with the Iranian nuclear program has been written by Gregory Jones, and released by NPEC.  Some key points:

Ethanol blenders credit moves forward towards extension at current rates in the Senate.  Even more ludicrous since even without the excise tax credit subsidy we are still forced to buy the stuff at above market prices under the federal Renewable Fuel Standard.

Chuck Grassley makes a good point when he argues that you can't treat ethanol and oil subsidies differently:

The fact is, it's intellectually inconsistent to say that increasing taxes on ethanol is justified, but it’s irresponsible to do so on oil and gas production.

Grassley, a strong supporter of everything corn, uses this logic as a justification for keeping all subsidies.  Of course, the logic is even stronger in the other direction:  get rid of all of the subsidies -- to oil and gas as well as to ethanol.  Large fiscal and environmental benefits.  Such broad-based reform is difficult, to be sure.  But there have been successes.  New Zealand, for example, got rid of a wide swath of sectoral subsidies.

Domestic producers will see little change in their subsidy capture once the Renewable Fuel Standard mandate premiums rise to offset the decline in excise tax credit subsidies.  Thus, Grassley's arguments about domestic energy security seem a bit hollow.  What then?  Perhaps it is the fact that without VEETC, producers can't export taxpayer subsidized ethanol to other countries.  Robert Rapier did a nice write-up of this issue on his R Squared blog.

In the House, legislation kicking in another $7 billion in loan guarantees for new nuclear reactors has passed.  It's another "opportunity" for taxpayers to participate in building what industry regularly claims to be a low-cost energy resource over the long-term.. Seems like the massive bailouts of the last two years have made people forget that a $7 billion investment into a private firm is hardly the norm throughout the history of the United States.

Think the money is safe?  I don't.  In other nuclear industry news:

A few useful resources on the potential links between civilian nuclear power and proliferation from NPEC.  Here's a couple of recent postings by Henry Sokolski on the technology sharing agreements with Vietnam and UAE.  A more detailed exposition of the nuclear nonproliferation treaty can be found here, with a variety of essays on what the NPT does and does not require in terms of technology sharing.

Twenty years ago, economic modeling of the cost of new coal plants never included an estimate for carbon controls.  Today, investors all expect to see it.

In constrast, similar models of nuclear economics often ignore the many subsidies granted to the sector through federal tax, insurance, and credit policies.  None include even a placeholder for the proliferation-related costs that will be triggered by a widescale expansion of reactors and fuel cycle facilities around the world.  While commercial interests may explain the rationale for utilities to ignore these costs as long as possible, there is no excuse for the Obama administration doing the same.

Department of Energy: Further Actions Are Needed to Improve DOE’s Ability to Evaluate and Implement the Loan Guarantee Program

DOE has taken steps to implement the Loan Guarantee Program (LGP) for applicants but has treated applicants inconsistently and lacks mechanisms to identify and address their concerns. Among other things, DOE increased the LGP’s staff, expedited procurement of external reviews, and developed procedures for deciding which projects should receive loan guarantees. However, GAO found:

Just last week, the Economist magazine noted in an editorial that:

However you measure the full cost of a gallon of gas, pollution and all, Americans are nowhere close to paying it. Indeed, their whole energy industry—from subsidies for corn ethanol to limited liability for nuclear power—is a slick of preferences and restrictions, without peer. The tinkering that will follow this spill will merely further complicate it.

As if on cue, out comes "The American Power Act."  For some reason, idle hands in Congress always find particular comfort in working on energy bills, and an early summary of the latest of a long line of government energy initiatives has just been released.  A short summary of that summary can be accessed here.  The American Power Act will dole out all sorts of goodies, with some huge potential gains to coal and nuclear power.

Before going into what the bill contains in giveaways, it is useful to note some of the key things it does not do.  It does not remove the government from the role of choosing technology winners and losers, and it does not build a neutral policy platform on which all energy technologies must compete for whatever public support is offered.  In fact, the bill summary views this not as a bug, but as a feature, noting that the bill is "investing in innovation across all energy sources."  Investing in everything is not a very good theory of change, as I've examined in detail previously.  Finally, it does not work to quickly establish greenhouse gas price signals for key energy and industrial sectors, but rather seeks to shelter them from these prices for many years.

In terms of the new subsidies in the bill, in depth analysis requires the specific legislative language.  However, some choice nuggets are already evident in the summary:

Update:  The full bill, in all 987 pages of glory, has now been released.  It will obviously take some time to go through.