US looks ahead after ethanol subsidy expires

Doug Koplow of the policy consulting firm Earth Track said that the mandate is effectively another kind of subsidy for ethanol, and warns that it may be difficult to come up with new alternative fuels without adverse environmental impacts.

While there has been some enthusiasm about biofuels from switchgrass, cornstalks and algae, Koplow said, "I think people are painting that as too rosy a picture." 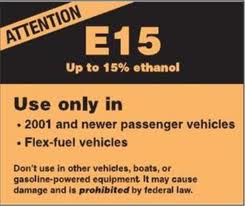 My first stint in the world of subsidies was looking as federal disincentives to recycling in an analysis for the US Environmental Protection Agency.  Most often these took the form of subsidies to primary materials.  The linkages between extraction, energy-intensive processing, and competition with recycling and reuse markets were fascinating, but ones that EPA seems to have steered clear of for far too long.

I recently participated in a Webinar looking at this issue again (slides are here), and it is useful to note that subsidies to landfilling and conversion of recyclable or compostable materials into base energy are growing and increasingly important impediments to higher materials reuse and recycling.  This is not a useful financial or fiscal outcome.

On the horizon is now a subsidy-fueled push to convert municipal solid waste into ethanol.  Because the resultant fuel will qualify as cellulosic ethanol (though I'm not quite clear on how the large portion of organic food waste -- often including starches and sugars would be treated in the mix), the subsidies are rich indeed.  More than $1/gallon in production tax credits; plus what is likely to be substantial incremental subsidy values through the cellulosic RINs under the Renewable Fuel Standard and the related reverse auctions that may be run in the near-term to boost cellulosic supply.

While this seems an insane policy to me (there is no way these plants will cull all of the recycable materials out of the waste stream first, any more than WTE plants have done), if you are part of the ethanol industry, it is all good news.  Here is Ethanol Producer Magazine:

The real excitement now is coming from the cellulosic ethanol sector. We expect to slowly and steadily be adding more plants under construction to our map. There appears to be a nice synergy emerging with MSW-to-ethanol projects and urban areas facing landfill issues. Financing is still very much an issue, but slowly, projects are finding a way to put together the package. It’s very satisfying to be able to report on those.

Note that the "package" reporter Susanne Retka Schill is talking about is an agglomeration of as many federal, state, and local subsidies the developers can possibly tap into to make the thing a go.  No matter that the environmental and global warming benefits from recycling, rather than conversion into a liquid fuel, would be much higher.

The march to E15-ity and beyond continues, with DOE submitting vehicle tests for how older cars performed with the higher blends of ethanol.  EPA allowed blends up to 15% for model 2007 and later vehicles in October 2010, and is expected to rule on earlier models (2001 and later) this month.

A few elements of this whole issue continue to puzzle me.  First, with DOE a strong proponent for ethanol blends for so long, was there no more neutral party to test the impact of the blends on vehicles?  Second, Reuters notes that EPA delayed its decision on later model cars "after the Energy Department said it needed to redo several tests because some of the cars were not properly prepared." While Reuters says that "the additional testing was not directly related to the E15 fuel," I could not locate information from DOE on what exactly the proper preparation was related to.  I wonder if this argument would work when my kids take their SATs?

State and federal subsidies to biofuels: magnitude and options for redirection

Hundreds of government subsidies have fuelled the growth of ethanol and biodiesel in the USA, worth half or more their retail price. Cumulative costs under some mandate proposals exceed $1 trillion by 2030. Even using favourable assumptions, reduced greenhouse gas emissions from biofuels are far more expensive than other options: more than $100/mt CO2e even for cellulosic ethanol and nearly $300/mt CO2e for corn-based fuel. Despite rising concerns, environmental screens in existing subsidy policies remain weak or non-existent.