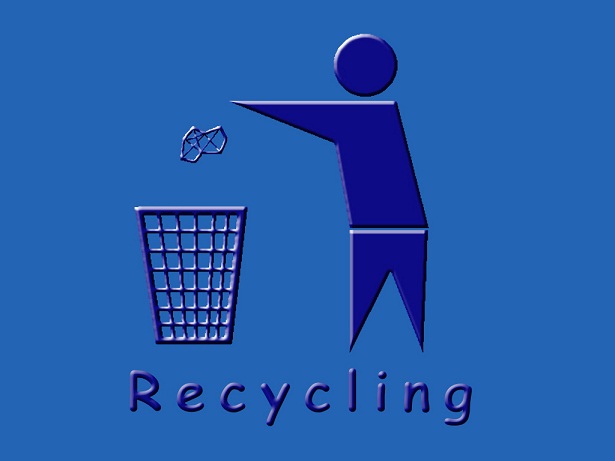 The first work I did on environmentally-harmful subsidies was in 1988, and wasn't actually on energy subsidies -- at least not at first.  It was an examination of federal government subsidies to primary materials, and whether these subsidies undermined the marketability of secondary materials.  Scrap plastic, metal, and paper were starting to pour off of the municipal curside recycling programs that were popping up all over the United States at that time, and the demand side of the equation was still adjusting. Because many secondary materials required much less energy than making them from mined resources, it turned out that the energy subsidies were critical to get a handle on, and became the focus of much of my subsquent work.

During this time period, the US Environmental Protection Agency was addressing recycling and solid waste in many different ways.  This particular study, Federal Disincentives: A Study of Federal Tax Subsidies and Other Programs Affecting Virgin Industries and Recycling, was conducted for EPA's Office of Policy, Planning, and Evaluation.  I came across the report the other day and decided to scan and post it.1

I'd forgotten that Terry Dinan was the initial work assignment manager on this paper.  She continues to do work on energy subsidies today, though is now with the Congressional Budget Office rather than EPA. 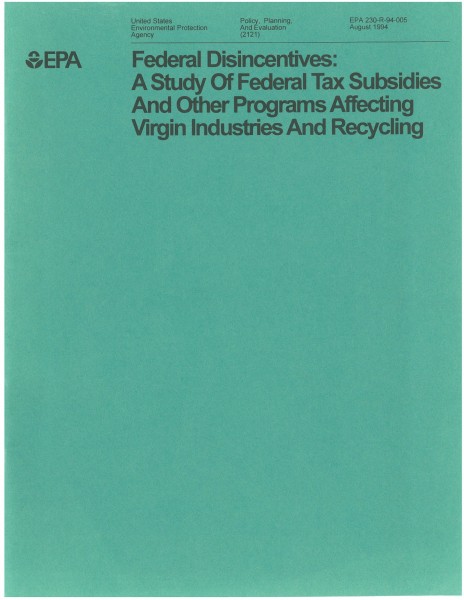 When I reread the paper, there was much in there I still found useful.  An inventory of the many ways the federal government undermined recycling through subsidies to primary industries, as well as the related historical data, is a useful reminder of how long these distortions have existed.  Incremental subsidies to primary aluminum over secondary, for example, were estimated to comprise 9-22% of the delivered price of the metal. These types of distortions make a difference, particularly as recovery rates for aluminum in the US have hovered well below optimums.

But twenty years or more is far too long to go without updating data on this important area. The carbon reduction benefits of using secondary materials rather than primary are quite large, as are reductions in many other types of environmental damages.

If I were to redo it, there are some things I would want to bring into more focus now.  This includes more detailed coverage of subsidies to disposal technologies that compete with recycling and reuse; putting better numbers on water subsidies; federal support for cogen in massive industrial plants; and state and local subsidies of all types for expanding these facilities and keeping them open.

Tax-favored organizational structures (e.g., master limited partnerships, REITs, private partnerships) used by primary industries would also warrant careful evaluation, as these are increasingly important in the timber, metals, and fossil fuel sectors.  And with so many commodities being imported, case studies of foreign subsidies for selected materials flowing into the US would be quite interesting as well.

In the late 1980s, the focus was on materials recovery and reuse.  Resin sorting of plastics, the ability to handle mixed types of paper, and all sorts of other technical problems had yet to be worked out.  In the ensuing decades, there have been many improvements in materials recovery; but some important questions are no longer being asked, and should be.

Are you aware of recent or pending working looking at subsidies to WTE and landfilling over recycling; to timber and paper operations; or to metals mining?  Please email if you do.

This study (main report - data annexes) led by IEEP and carried out in collaboration with IVM, Ecologic Institute and VITO aims to support the European Commission in implementing the call in the Resource Efficiency Roadmap to phase out EHS by 2020. The study identifies a number of existing EHS in EU Member States across a range of environmental sectors and issues.

My first stint in the world of subsidies was looking as federal disincentives to recycling in an analysis for the US Environmental Protection Agency.  Most often these took the form of subsidies to primary materials.  The linkages between extraction, energy-intensive processing, and competition with recycling and reuse markets were fascinating, but ones that EPA seems to have steered clear of for far too long.

I recently participated in a Webinar looking at this issue again (slides are here), and it is useful to note that subsidies to landfilling and conversion of recyclable or compostable materials into base energy are growing and increasingly important impediments to higher materials reuse and recycling.  This is not a useful financial or fiscal outcome.

On the horizon is now a subsidy-fueled push to convert municipal solid waste into ethanol.  Because the resultant fuel will qualify as cellulosic ethanol (though I'm not quite clear on how the large portion of organic food waste -- often including starches and sugars would be treated in the mix), the subsidies are rich indeed.  More than $1/gallon in production tax credits; plus what is likely to be substantial incremental subsidy values through the cellulosic RINs under the Renewable Fuel Standard and the related reverse auctions that may be run in the near-term to boost cellulosic supply.

While this seems an insane policy to me (there is no way these plants will cull all of the recycable materials out of the waste stream first, any more than WTE plants have done), if you are part of the ethanol industry, it is all good news.  Here is Ethanol Producer Magazine:

The real excitement now is coming from the cellulosic ethanol sector. We expect to slowly and steadily be adding more plants under construction to our map. There appears to be a nice synergy emerging with MSW-to-ethanol projects and urban areas facing landfill issues. Financing is still very much an issue, but slowly, projects are finding a way to put together the package. It’s very satisfying to be able to report on those.

Note that the "package" reporter Susanne Retka Schill is talking about is an agglomeration of as many federal, state, and local subsidies the developers can possibly tap into to make the thing a go.  No matter that the environmental and global warming benefits from recycling, rather than conversion into a liquid fuel, would be much higher.