For years, the International Energy Agency has been measuring subsidies to consumers by looking at the gap between world reference prices for a particular form of energy and what that energy sells for in a country's domestic market.  The lower the cost to consumers relative to its world value, the higher the subsidy.   Russia has always been among the top of this list: in the IEA's 2010 update, Russia came in third with just under $40 billion in consumer subsidies.

Calculating consumer subsidies is not an easy task -- but it is downright simple compared to trying to figure out the many ways that a country lacking transparent fiscal systems subsidizes producers.  There are assorted tax breaks, but also production-sharing agreements, tremendous government ownership of energy-related assets and infrastructure, and complicated financing schemes by which credit is channeled to those and other projects.  Like China, the energy sector in Russia is very much a strategic asset of the government, and an extremely important one at that.  It is quite difficult to figure out precisely how this relationship plays out in terms of altering market relationships and prices.

Dr. Ivetta Gerasimchuk, working with WWF-Russia and IISD's Global Subsidies Initiative, has done an admirable and detailed review of this arena in her recent study Fossil Fuels – At What Cost? Government support for upstream oil and
gas activities in Russia.  The analysis touches on a number of critical themes:

The chart below links many of the core subsidies identified to stated objectives of the policies, and compares support for extending production from mature fields versus subsidizing new ones.  The objectives (shown in blue in the center) should be taken as directional rather than definitive.  Politics and money are both at play as well, and often tip policies towards those with power rather than towards those most likely to achieve stated social policy goals. 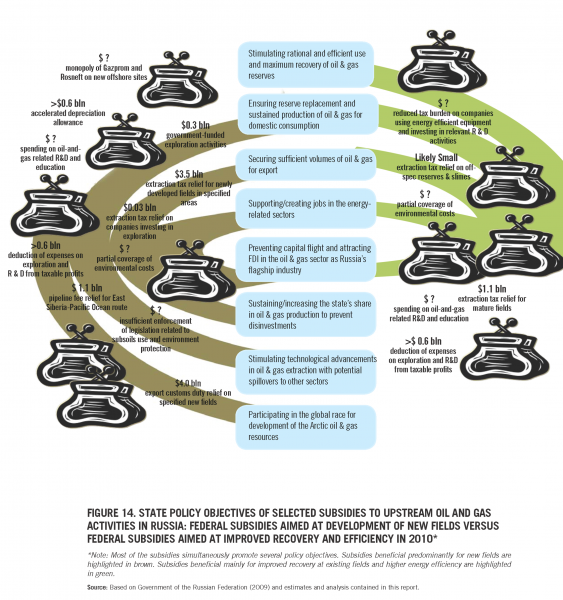